Breaking News
Home / AFL / Low-scoring footy is here to stay, and it’s going to get worse

Low-scoring footy is here to stay, and it’s going to get worse

admin June 25, 2020 AFL Comments Off on Low-scoring footy is here to stay, and it’s going to get worse 23 Views 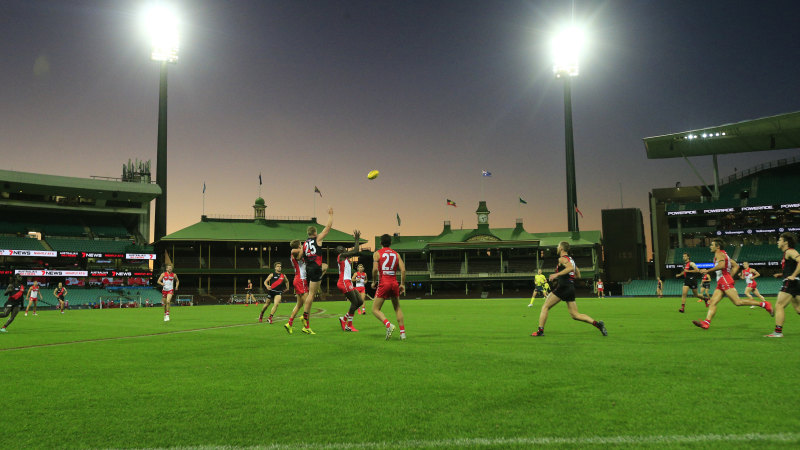 But while the rhythm and overall dynamic of the game is undoubtedly different, the biggest issue may well be the impact the shorter quarters have on scoring. The issue of declining scores has been an ongoing headache for the AFL, so much so it introduced new rules last year to help open up the game and increase scoring.

But those dreaming of more goals shouldn’t hold their breath. Naturally, shorter quarters on the clock leaves less time to score. As you’d expect in a season where games are 20 per cent shorter, the current average score this season is about 20 per cent less than last year.

After three rounds, the average is 65 points, but worryingly, in round 3 it was only 59 points.

Perhaps the biggest concern is that shorter games will also lead to even less time and space on the football field, which means scores won’t be increasing any time soon.

For decades in the amateur and semi-professional eras of sport, coaches tried to win by creating more time and space to move the ball quicker and more fluently from one point of the ground to the other. The idea was to score as often as possible.

But in the serious business of professional sport, where winning keeps players and coaches in jobs and revenue streams flowing, the focus on time and space has changed. Now the focus is on reducing the opposition’s time and space by protecting zones, applying pressure, causing turnovers and stoppages and ultimately restricting the opposition from freely moving the ball.

This has led to a very different game, one that has all but eliminated high-scoring contests.

The only thing that can sometimes open the game up is fatigue. When the players tire, they simply can’t stop the opposition as effectively. But here’s the thing: while players are still finding their optimum fitness and skill this season, once they do, shorter quarters will only ensure they are better at closing down time and space for longer portions of the game.

Of course, this could all change if the coaches focused more on attack than defence, but in an age where a tackle, turnover or goal assist has become as valuable and celebrated as a goal, this seems less likely than a 100,000 crowd at the MCG next weekend.

So, if it’s higher scoring you’re after, you might have to wait another year, at least. In the meantime, the real interest in scoring for season 2020 may well be reduced to seeing how low we can go.

Previous ‘How did you get out of the TV?’ Brendan Murphy on his brush with fame
Next Swans fear the worst as Naismith suffers another knee injury