NRL 2020 as it happened: Cleary, Panthers too strong for wayward Rabbitohs

admin 2 weeks ago Sport Comments Off on NRL 2020 as it happened: Cleary, Panthers too strong for wayward Rabbitohs 12 Views 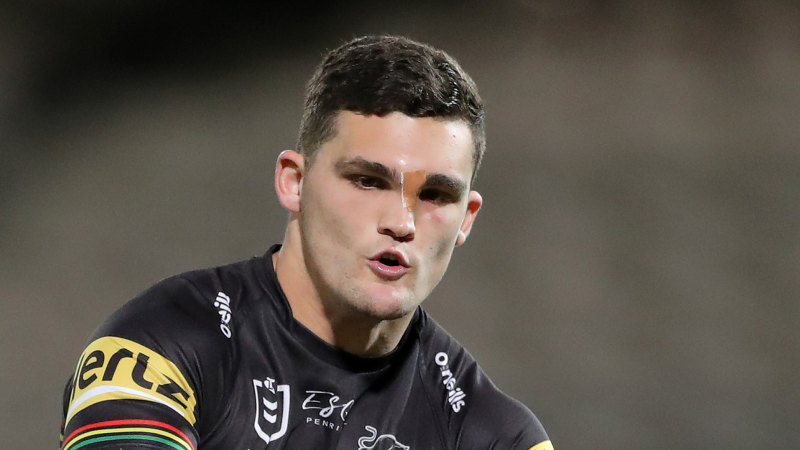 Nathan Cleary was the star but Penrith are red hot right now. They go to the top of the NRL ladder and may be the ones to challenge the might of the Roosters when the whips are cracking in October.

Souths continue their underwhelming season. Their only wins have been against the Warriors, Titans and Sharks. They’re not the scalps of a genuine premiership contender.

Too little, too late for Souths put Alex Johnston is in.

A cracking pass from Cody Walker put the winger away down the right sideline.

It won’t matter. This one has less than a minute remaining and Penrith lead 20-12.

Nathan Cleary beat four defenders with a dazzling run and stretched out to score a well deserved try.

The NSW Origin star has been superb tonight.

The Panthers have a 20-6 lead with a minute to play.

He’s off to the sin bin after pulling the leg of Brent Naden inside the Rabbitohs’ red zone.

The star halfback has taken this one out to a two score game after slotting a penalty goal from the James Roberts professional foul.

The Panthers lead 14-6 with 10 to play and have a one man advantage to boot.

James Roberts is off to the sin bin.

He will play just the last 90 seconds of the match after stopping Stephen Crichton from having a fair crack at chasing down another perfect Jarome Luai grubber.

Penrith will be mighty hard to beat from here. They have had all the ball in the last 10 minutes and lead 12-6 with 12 to play.

Dylan Edwards is in and Penrith are back out to a six point lead.

Edwards palmed Braidon Burns, sold a dummy to Alex Johnston and dived over to put the Panthers up 12-6.

James Roberts should have been away with an Api Koroisau intercept which would have put Souths in front.

Deservedly so, too. They have dominated the second half.

Instead, the man they call ‘The Jet’ dropped the pass cold and gave the Panthers prime field position.

A few minutes later, the Rabbitohs skipper turned the ball back inside to Bayley Sirronen and Souths have their first points of the night.