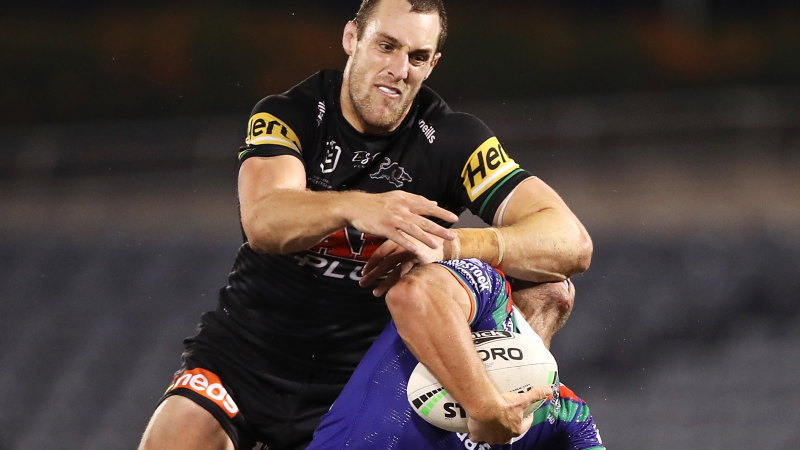 But this neat spin on bad news by past and former politicians is the only comparison which should be made between Trump and Annesley. Annesley is a former member of parliament, a minister of the Crown, no less, once holding the portfolio of sport in a NSW coalition government.

But he vacated his seat to become CEO of the NRL’s most struggling club, the Gold Coast Titans. Earlier, he was a top referee and the NRL’s chief operating officer before being wooed back to headquarters. He knows something about service and sacrifice.

His responded to the Trump comparison with a mile of tongue in an acre of cheek: “I’m flattered that you’ve compared my weekly Monday afternoon musings to the power and influence enjoyed by the leader of the free world.”

Annesley insists he is not obfuscating, saying, “In relation to a rise in judiciary charges and wrestling-type offences, I genuinely believe this is attributable, at least to some degree, to the increased scrutiny we have introduced this year through the engagement of an expert analyst with many years of club experience.

“I do not agree that it logically follows that more judiciary charges automatically equates to an increased incidence of offences. In fact, I would argue that more intense scrutiny actually has the opposite effect in that it raises awareness of coaches and players which in turn reduces the incidence of offences over time.”

For the resumed 2020 season, the NRL introduced a six-again rule, designed to eradicate wrestling. So, if there has been a rise in grapple tackles, we don’t want to blame the new rule.

It’s better to evoke George Orwell’s 1984 masterpiece and blame it on increased surveillance, in the same way Trump blamed COVID-19 spread on US states widening testing. However, while Trump told the Tulsa rally, “So I told my people to slow down the testing”, Annesley is committed to increasing surveillance and statistical gathering.

“Our objective is to ensure we are monitoring and collating data on methods and tactics used on the field so we can provide a safer environment for players, ensure offences do not fall through the cracks,” he said.

While Annesley also claims the six-again rule “takes focus off the referees”, presumably because there are no stoppages for commentators to analyse the rulings, he won’t accept they have become less accountable.

In fact, he suggests God may also be judging them: “I would go so far as to suggest there are few more publicly accountable roles on the planet (or any other big place for that matter!).”

But he does not deny commentators their right to judge referees. “Our objective of promoting free-flowing entertaining football does not prevent any observer from forming a view about how referees exercise judgement and discretion in striving to straddle the prickly barbed-wire fence of compliance vs continuity,” he said.

So, if there is no Orwellian big brother policy at Rugby League Central to ban rebellious thinking, how is it that his recent Monday muttering gave theimpression that clear language has abdicated to “political language” – as George Orwell phrased it – “designed to make lies sound truthful and murder respectable, and to give an appearance of solidarity to pure wind”.

Annesley answers by channelling Orwell, saying, “I can assure you the clocks have certainly not struck 13 at Rugby League Central and 1984 is well behind us. While George Orwell envisaged a dark and oppressive future, we are proactively trying to forge a bright and prosperous future for our game. Not everyone will be on board for that journey, albeit a minority, but in the immortal words of Orwell himself, ‘If liberty means anything at all it means the right to tell people what they do not want to hear’.”

Roy Masters is a Sports Columnist for The Sydney Morning Herald.

Previous Tigers dump four premiership players, Demons drop Bennell
Next Why Kangaroos-All Blacks showdown could be over before it began