The ‘giant wombat’ fossil that had to be discovered twice 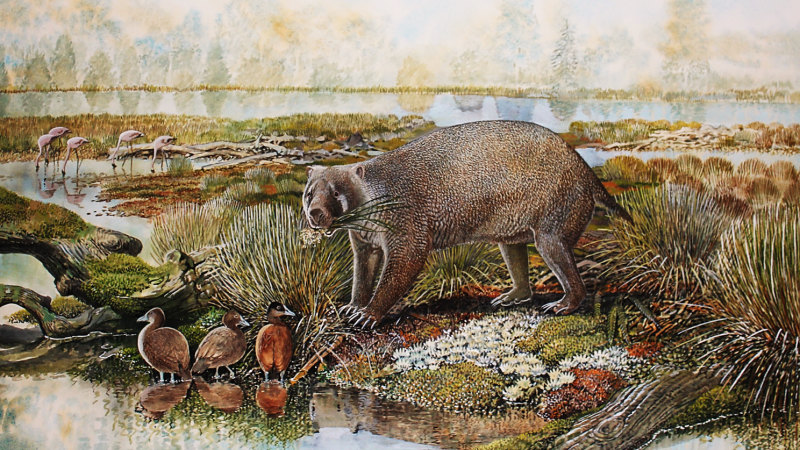 “Based on its claws we believe it was a scratch digger, so not a burrower like modern wombats but certainly able to dig into the ground.”

But it was its teeth that attracted Professor Louys’s attention when he was rummaging in the drawers of the American Museum of Natural History in New York several years ago as a PhD student.

“I found myself with some time to spare and as you do you go looking in some drawers to see what’s there, so I thought I’d have a look in their Australian section,” he said.

“And when I opened the draw straight away I saw this fossil with these teeth sort of like I had seen before, but it struck me this might be something completely new.”

Intrigued, Professor Louys set out to find out more about the fossil. That put him in contact with Professor Mike Archer, who is now based at the University of New South Wales and who was part of the original team that found the specimen in 1973.

Professor Archer said they discovered the fossil, along with a number of others, in the dry bed of Lake Pinpa in South Australia.

Normally, the lake bed is covered with salt and sand, but at the time that had been blown away by storms, allowing researchers to drill down and pull up a wealth of fossils.

“I never actually got to look at [the Mukupirna fossil] initially because they put it in plaster casts to safely transport it and sent it back to New York,” Professor Archer said.

“Once it got back there Dick Tedford, who was the guy who had co-ordinated that trip, he came back to Sydney and brought some of the tooth row with him, and we realised it was similar but not the same as some of the other fossils we were finding.”

Professor Louys then contacted Professor Archer, and they collaborated with a number of colleagues, including from the University of Salford and the Natural History Museum in London, to finally give Mukupirna a name and a place in the web of ancient Australian megafauna.

Professor Archer said Mukupirna represents Australia on the brink of a major climactic shift 25 million years ago, when the continent went from dry, temperate areas to lush tropical rainforests.

“During that period we see the loss of a lot of very weird groups of animals that were around up until 25 million years ago and then vanish,” he said.

“We can assume that the greenhouse climate change event that occurred around that period took it out.”

The research has been published in the journal Scientific Reports.