Breaking News
Home / National News / The toppling of statues is a moment in history, not its erasure

The toppling of statues is a moment in history, not its erasure

admin 2 weeks ago National News Comments Off on The toppling of statues is a moment in history, not its erasure 17 Views 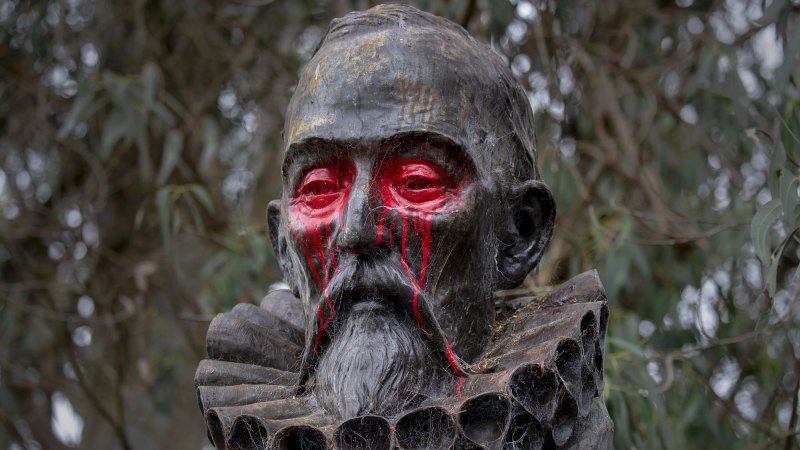 But other examples tell us of the reworking of the past to comment on the present.

In 2100 BCE the Mesopotamian king Naram-Sin commissioned a monument to celebrate his victory over the mountain people from the east. In it, he stands taller than anyone else with his foot on the neck of his vanquished foe and an inscription in cuneiform above his head celebrating his victory.

Some 1000 years later a king from the eastern state of Elam, invaded Mesopotamia, carried off the monument and retagged it with his own inscription placed over the conquered victim’s head, reclaiming the monument as a testament to his own victory over his people’s oppressors.

We have witnessed this retagging in the past weeks over and over as people reclaim their history with spray-painted graffiti on statues they associate with their victimisation. A key point here is that the king of Elam had no idea of the identity of Naram-Sin himself. By that time, the monument had become a representation of power, not of an individual king. And if someone had told the Elamites that Naram-Sin was really a great guy (he wasn’t), it wouldn’t have mattered.

Archaeologists have a peculiar relationship to monuments like these. Traditionally we used them to reconstruct “history”: the sequence of kings, the battles fought, the territories conquered.

The stele of Naram-Sin stands proudly on the cover of textbooks about Mesopotamia but its reinscription by its victims is almost never mentioned.

When classical historian Mary Beard complained that as much as she decried the racism of Cecil Rhodes, the removal of his busts in Oxford would “rewrite history”, she was thinking of that kind of history.

But archaeologists have come to understand that all material objects, like the statues that have been toppling around the world, are not static repositories of information about the past. They not only represent and transmit the ideologies of their makersbut continue to shape communities’ beliefs and emotions long after their makers and subjects have slipped into historical oblivion.

Archaeologists understand material objects as active participants in the construction of identity whatever the original intentions of their production were.

Monuments memorialise but the community memories that are constructed from them are dynamic and depend almost entirely on context.

When San Francisco removed a statue of Columbus that had been installed in 1957 as a celebration of the Italian-American community, city supervisors had to acknowledge that the statue meant different things to different communities. In the end, the insult endured by the Indigenous communities for so many years trumped (if you’ll pardon the expression) the Italian-Americans’ bid for a connection with the founding of a nation.

The past few days have seen lists drawn up: Who stays? Who goes? Who should replace them? But rating the worth of individuals to be put on a public pedestal also seems to miss the point of commemoration.

The faces on statues of Roman emperors could be changed at will as a new family came to power, and it made little difference to the people in the forum.

It is the nature of archaeology to want to preserve and protect material culture. Our stock in trade is the discarded past, not the carefully curated survivors.

We read the subtleties of community identity in broken pot shards, crumbled houses, and ancient rock shelters. We diagnose economies from discarded ration coupons, clay bills of trade and piles of fishbone. If we were looking in public spaces for the values that hold our communities together, we would give the statues a miss. We would look at the remains of the playgrounds with their accessible equipment, at the multi-ethnic, multinational footy and soccer and basketball nets, at the brightly graffiti-ed skate ramps, even at the benches with memorial plaques to a beloved husband (you got a pizza my heart, reads one in Edinburgh Gardens). It is these mundane material objects that reflect and construct our communities.

Let the statues topple. We will dig them up one day, or retrieve them from the long-forgotten storage vaults of a museum, and derive more meaning from the fact of their felling than we ever would from the fact that they once stood. The Black Lives Matter tags and broken plinths will write the history of the momentous winter/summer of 2020.

Hilary Gopnik and Jessie Birkett-Rees are archaeologists at the Monash Centre for Ancient Cultures.