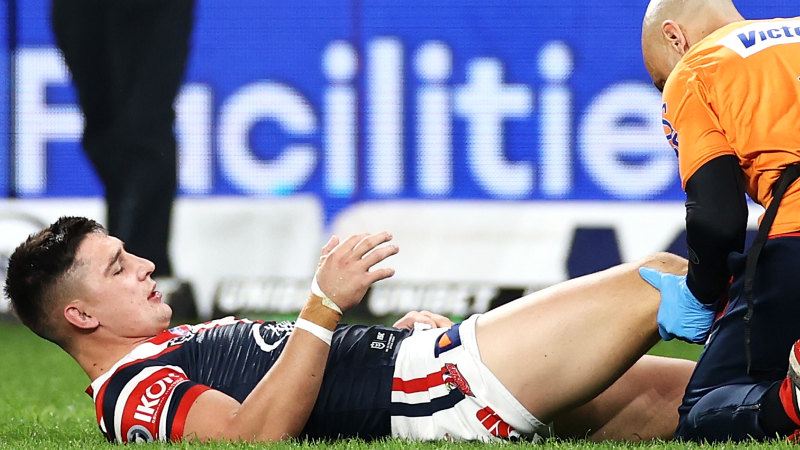 Roosters coach Trent Robinson was trying to get his head around the loss of two key players for the year and preferred to leave the turf talk to the experts.

A Roosters’ trainer made it known to the ground manager he was unimpressed and the players’ boots were getting stuck into the turf.

“I only found out after the game someone said we made a formal complaint, which is complete nonsense,” Robinson said.

“In the warm-up there was [talk of the ground being sticky].

“To be honest, I don’t care. I’m not an expert on that stuff. I’ve just had two guys do an ACL. It’s not up to me to make an assessment on the ground. Someone else can do that.

“If they think they need to [assess it] because two guys have had [ACLs] then they’ll do it. Other than that I’ll get on with coaching the team.”

Robinson said it was much more than a victory over the Dragons and pointed out Isaac Liu tried to play on with a broken rib, while Morris’ back had forced him to avoid sitting down in team meetings all week.

“It was really incredible some of the performances out there,” the coach said.

“I was really proud of them. I thought they adapted really well and played really tough.”

The $360m stadium at Parramatta has copped plenty of traffic since league’s return from the COVID-19 shutdown and by Sunday night will have hosted a whopping 11 games in just 22 days.

Parramatta, Canberra, Canterbury and Wests Tigers officials will no doubt hit the phones first thing to seek assurances the surface will not pose a risk to their players for games on Saturday and Sunday night.

A Bankwest Stadium spokesman said the turf had held up well given the heavy schedule, but the ”signs of wear and tear are a result of the winter rye grass not getting sufficient time to grow between events”.

“But pre-game testing indicates the playing surface is stable and safe,” the spokesman said.

“Any injuries to players are a concern. The stadium team will work with the NRL and clubs to ensure the best possible surface for each and every game.”

Just this week Campbelltown Sports Stadium came under fire for its suspect surface and the Panthers-South Sydney clash was moved as a result.

The Eels host North Queensland at Bankwest next Friday, while the Tigers have already moved next Saturday night’s game against the Panthers to the venue.

Radley shot out of the line to tackle Dragons winger Jason Saab in the eighth minute when he fell to the ground and immediately clutched at his right knee.

Verrills, who started the game ahead of Jake Friend in a bid to give the long-serving No.9 a break after a hectic few weeks, lasted 22 minutes when he broke down in similar circumstances with nobody around him.

The loss of Verrills will place more pressure on Friend to remain healthy, while Andrew Johns said on Nine’s coverage the injury to Radley would mean the Roosters change the way they play and ”it puts more pressure on Kyle Flanagan”.

Courageous captain Cordner also sent a scare through the camp, first when he appeared to injure his groin in the opening minutes, then suffered a bloody head cut in an accidental collision with Jared Waerea-Hargreaves.

The Roosters went into the game without James Tedesco, who will be back for the clash with Melbourne on Thursday night.

The Dragons put up a good fight and even led early in the second half.

They had knocked over a couple of suspect rivals in Cronulla and the Gold Coast, but were a completely different team to the one that was lifeless when the season re-booted late last month.

Previous As it happened: Victory over Dragons comes at a price for Roosters, Storm blow away woeful Warriors
Next Howzat? Cricket’s golden couple open up about life, love and iso living