Breaking News
Home / AFL / Blues have the belief to take on any opponent: Teague

Blues have the belief to take on any opponent: Teague

admin June 27, 2020 AFL Comments Off on Blues have the belief to take on any opponent: Teague 29 Views 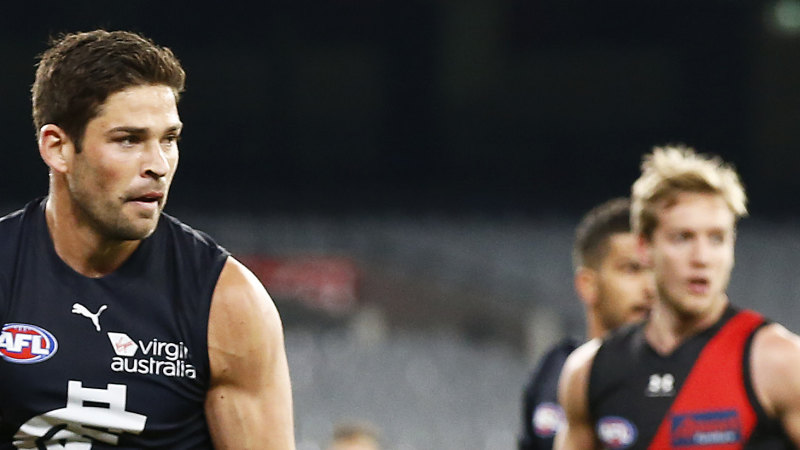 “You have got to win these games and you have got to be in them. Probably for too long we haven’t been in those games. It’s great we are getting there,” Teague said.

“The boys reckon they are ageing me really quickly, we will see how we go there. It’s really good. They stuck strongly when they got two goals behind. We are doing a lot right but we just weren’t finishing our plays but they stayed really calm. I think it’s probably from the experience of playing in close games.”

There was a feeling the 50m penalty against Betts had been of a generous length but it did not matter.

“We did mention it was a long 50 but it doesn’t make too much of a difference. The umps are doing what they think is right and we will back them in,” Teague said.

The stinging loss capped a rugged week for the Bombers, having had last weekend’s match against Melbourne postponed after Conor McKenna was diagnosed with COVID-19. Teammate James Stewart was also put into quarantine for a fortnight.

Coach John Worsfold said the preparation had not been ideal.

“I am no expert in that. I don’t know how you could possibly measure it but, obviously, it is not ideal to have your players locked away at home from Saturday afternoon through to Tuesday afternoon. But I thought, overall, their attitude to come out of that and support Conor and James and still try and focus on preparing for the game was really good,” he said.

Worsfold said the Bombers, finalists last year, were still tinkering with their game plan and ball movement and would debate whether Tom Bellchambers needed more help in the ruck. Opponent Marc Pittonet played a key role for the Blues in the final term.

Andy McGrath, Devon Smith, Dylan Shiel and Zach Merrett battled hard but couldn’t will their side over the line.

The Blues last featured in the finals under Mick Malthouse in 2013 but this latest incarnation, which has a mix of experience, class, emerging talent and a superstar in Patrick Cripps, has become an unexpected finals aspirant in this truncated season.

“We have to play our best footy and that’s what we are focusing on each week. But we feel every time we get a game we can go out and compete and win,” Teague said.

“I am not going to put a number on our wins and losses but I want to hold ourselves to the way we go about it and the way we execute.”

That Cripps no longer has to be dominant in the midfield for the Blues to win has been important.

“You can’t rely on one player. You need a group. You need a team to go out there, particularly the way we structure up. We play a real team offence, team defence game. We need everyone to play their role for us to be at our best,” Teague said.

“He probably learnt when we went over to Freo last year and won without him that there are other guys that can step up. He now plays a really important role … he probably felt he had to carry the load. Now he understands he has probably go teammates that can help them and he is willing the to give them that opportunity.”

Teague said Jack Silvagni had a potentially bruised lung, having been taken to hospital after he appeared to be punched by Merrett while kicking the ball in the first term. The incident will be scrutinised by the match review officer.