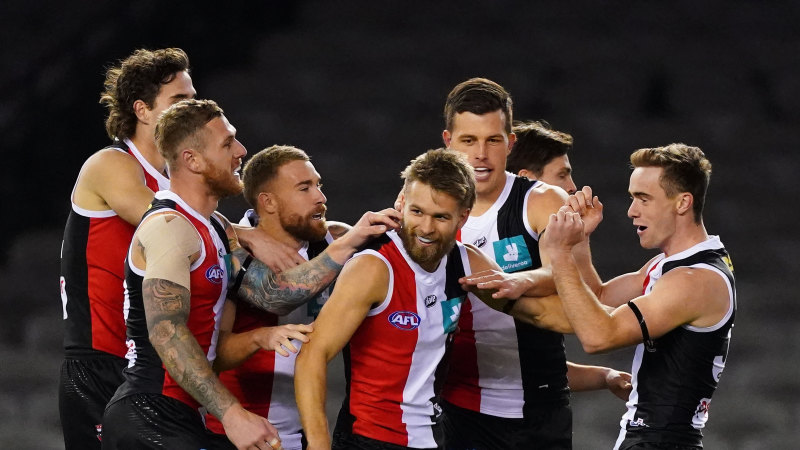 The Saints’ win leaves defending premiers Richmond flailing, without a victory since the resumption of the 2020 season.

Damien Hardwick’s men were sloppy, ill-disciplined, hesitant and largely out-grunted by St Kilda at Marvel Stadium. When their chaos-ball style worked it looked really good. The only problem was the Saints caution to the wind style worked better.

We know the Richmond system works when the players charged to carry it out are playing at a frenzied crescendo. At the moment too many aren’t. Having been up for three seasons, which generated two premierships, there seems a lack of spark at the moment.

Zak Jones and Brad Hill were superb through the middle for St Kilda. Dan Butler, against his old club for the first time, continued his fantastic 2020 form and looked dangerous constantly in attack.

The run and carry St Kilda played with exposed holes in the Tigers’ defence and midfield, and it didn’t help they gave away silly free-kicks and 50m penalties that led to crucial goals. Nick Vlastuin was responsible for two of these in the third and fourth term.

Sydney Stack dropped a simple chest mark that led to a Butler crumb and goal in the first term. Tom Lynch missed three very gettable set shots by his standards.

Dustin Martin had 16 possessions in his return from injury yet he failed to provide enough impetus for the Tigers.

Brett Ratten’s Saints have been up and down in 2020 and were completely overwhelmed last week against a strong Collingwood. That was probably the perfect preparation for this game.

They got an example of one of the top sides last week and spent this week preparing for another.

They did not fall short.

Admittedly quiet over the first three rounds, Jack Riewoldt has invited scrutiny because of the lofty standards he has set for himself over the past few years. It’s simplistic to say his poor form was a reason for the Tigers’ early season slip but it also isn’t totally inaccurate. He’s a barometer. On Saturday against the Saints he was down on his usual input again but at least seemed involved more, not anonymous. Martin and Trent Cotchin were also slightly off.

Marshall on his own

Paddy Ryder was a late out for the Saints (general soreness) replaced by Dean Kent (who kicked two goals including a crucial final term major), meaning Rowan Marshall rucked solo. There has been some discussion about the Saints’ need to play two ruckmen. Does it slow Marshall’s development? Can you play two ruckman these days?

Marshall did very well against Richmond’s Toby Nankervis, who is a solid player but by no means an AFL benchmark. Around the ground he was better, save for Nankervis’ important third quarter goal.

Ryder’s centre bounce ruckwork and his ability in the forward line are in his favour for selection, although you can’t drop Marshall and stunt his development. It’s an interesting subplot for 2020.

Let me entertain you

This was one of the best games to watch all season. Decent scoring (although this is not a pre-requisite for a good game), but most importantly two teams who weren’t really ever interested in slowing down the contest’s tempo.

Previous The man behind the ‘I Love NY’ logo, Milton Glaser, dies age 91
Next A brave boy and a medical miracle