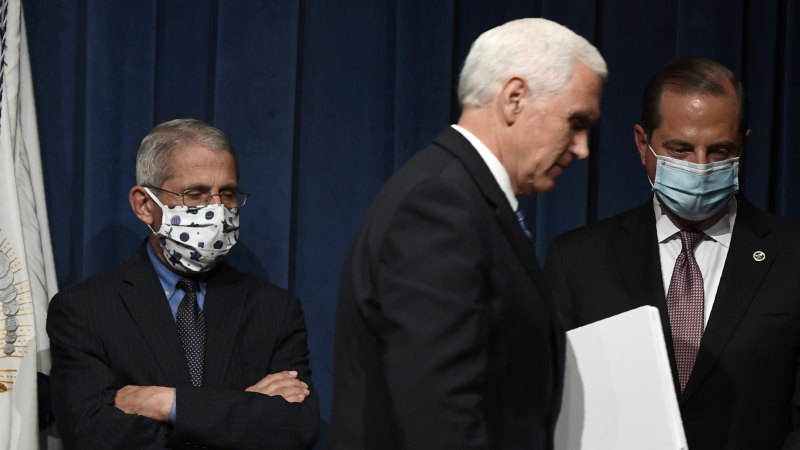 This week, the number of new infections has increased daily from 18 on Monday to 69 on Saturday, according to the Health Ministry.

Swiss nightclubs were allowed to reopen this month, but are obliged to register their guests.

“In case of further super spreader events, the closure of clubs must be considered,” the Zurich health authority said.

Switzerland has recorded 31,555 coronavirus infections with 1682 deaths so far, the ministry said.

In the US, which has confirmed more than 2.5 million coronavirus cases across the country, Pence called off the tour in Florida following a surge in confirmed cases there. There are also at least 125,435 deaths attributed to the new virus, more than in any other country, according to a tally released by Johns Hopkins University on Saturday.

A day after urging Republican lawmakers to put a positive spin on the coronavirus pandemic, the Trump re-election campaign said it was scrapping the rallies “out of an abundance of caution”.

No such “caution” was seen as necessary in recent days when Trump held events in Arizona and in Oklahoma, which is also experiencing a severe coronavirus outbreak.

Pence told Republican senators on Wednesday to focus on “encouraging signs” even as the pandemic spiked toward new highs.

Pence cancelled appearances in Tucson and Yuma, Arizona on Tuesday and a bus tour in Florida on Thursday.

Florida, Arizona and Texas are among the states that are seeing huge spikes in coronavirus infection rates in recent days.

Even after cancelling the campaign events, Pence is still planning to visit all three states to get an on-the-ground update on the pandemic.

The surge in cases is most notable across the southern and western states, where many of the states had less stringent lockdown measures. California, the most populous state, which did institute severe coronavirus closures, also saw record cases this week.

The country broke its single-day new infections record repeatedly this week, with well over 39,000 new reported cases on Thursday.

Deaths in the US are running at about 600 per day, down from a peak of around 2200 in mid-April. Some experts have expressed doubt that deaths will return to that level because of advances in treatment and because many infections are happening in younger adults, who are more likely than older ones to survive.

The virus is blamed for more than 125,000 deaths and over 2.5 million confirmed infections nationwide in the US, by Johns Hopkins’ count. But health officials believe the true number of infections is about 10 times higher.

The resurgence in the US has drawn concern from abroad. The European Union seems almost certain to bar Americans in the short term from entering the bloc, which is currently drawing up new travel rules, EU diplomats said.

China has extended COVID-19 tests to newly reopened salons amid a drop in cases. No positive cases were found in Beijing’s beauty and barber shops in a further sign that the city’s recent outbreak has been largely brought under control.

Beijing officials have temporarily shut a huge wholesale food market where the virus spread widely, reclosed schools and locked down some neighbourhoods. Anyone leaving Beijing is required to have a negative virus test result within the previous seven days.

Tens of millions of Chinese travelled during the three-day Dragon Boat Festival that ended Saturday, with no outbreaks reported immediately.

The Korea Centres for Disease Control and Prevention said that 40 of the newly reported cases were domestically infected, while 22 others came from overseas. The bulk of the local cases were detected in the densely populated Seoul metropolitan area, linked to nightclubs, church services, a huge e-commerce warehouse and low-income workers.

According to Italy’s Health Ministry data, there were eight deaths of infected patients since Friday, raising the nation’s known toll in the pandemic to 34,716.

There were 175 new cases, bringing the overall count of confirmed COVID-19 cases in the country where Europe’s outbreak first exploded to 240,136. In a sign the country was emerging from the crisis, fewer than 100 infected patients were occupying ICU beds nationwide for the first time since the very early days of the outbreak,

European leaders were taking no chances, however. German authorities renewed a lockdown in a western region of about 500,000 people in the past week after about 1300 slaughterhouse workers tested positive for COVID-19.

Serbia’s government says Defence Minister Aleksandar Vulin tested positive for the coronavirus. Known for his highly pro-Russian stance, Vulin was part of Serbia’s delegation led by President Aleksandar Vucic that attended a Victory Day parade this week in Moscow. Vucic met face-to-face with Russian President Vladimir Putin, but it was not clear whether Vulin did so as well.

Egypt has largely reopened. In Cairo, a metropolis of some 20 million people, coffee shops reopened Saturday to receive in-house customers but the smoking of “sheesha” from hookah waterpipes was still on hold.

However, the previously COVID-free country remains without restrictions on gatherings or business, with all four new cases intercepted within the managed isolation border regime.

Health officials on Sunday announced the new cases had arrived from India and Nepal, with one transferred to hospital for care.

“While today’s news that one of our recent cases is in hospital may be concerning to some, it is something the health system in New Zealand has remained prepared for,” Director General of Health Ashley Bloomfield said.

“I want to reassure the wider community that this person is receiving good treatment from the team at Auckland City Hospital who have previous experience of managing positive cases.”

Like many countries, New Zealand has closed its border to all but citizens and regular residents.

New Zealand now has 20 Kiwis considered active cases, each of whom have been quarantined.

The acting health minister of India’s capital said that New Delhi is facing a shortage of “trained and experienced” health care workers, providing a major challenge in a city that is the epicentre of the country’s coronavirus outbreak.

With over 77,000 cases, New Delhi has been hit harder than any other Indian city. Infections had been projected to rise to half a million by the end of July in Delhi, the territory that includes the capital. With the rate of infections slowing down, the number has been revised to 400,000, and Acting Health Minister Manish Sisodia said he was hopeful that it could be less.

“But we can’t be under any illusions,” he told The Associated Press in an interview on Saturday, when India’s total caseload passed half a million. “The availability of medical staff is a big challenge that (other) states need to address as well.”

Previous US withdrawal cruels Europe’s hope for a digital tax
Next Dyson Heydon : who knew and turned a blind eye?