Save Our Season: Tigers target key areas for improvement

admin 7 days ago AFL Comments Off on Save Our Season: Tigers target key areas for improvement 12 Views 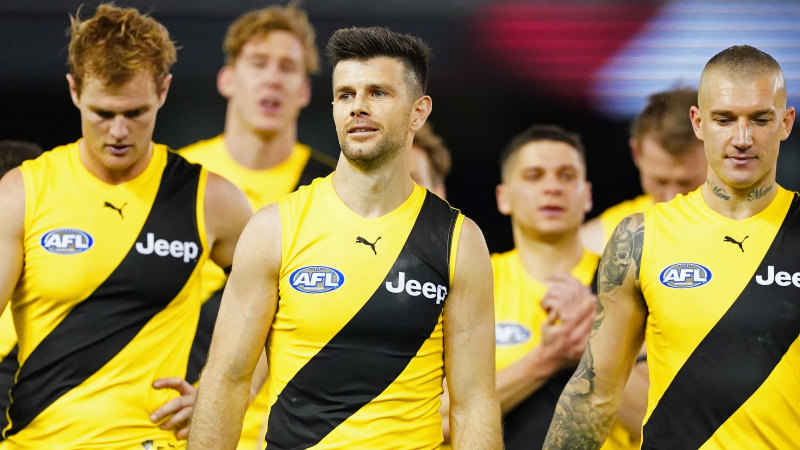 A club insider said there was some concern the group was lacking hunger after an exemplary three years that has yielded two flags and a preliminary final loss.

The same person said the players would relish the chance to spend an away trip together given the importance Richmond have placed on connection during this period of success.

Richmond will travel to the Gold Coast hub a day early on Wednesday to play West Coast on Thursday off a five-day break having received special permission from the AFL to not fly up on the day.

“That [connection] is part of what’s been taken away from us through coronavirus is spending more time together so I think we will all be pretty excited to get on a plane and get away,” Cotchin, the skipper, also said.

“[Toby Nankervis] Gave our midfielders first opportunity [so] it’s now up to us to repay him the faith in executing our plan from stoppage.”

Cotchin was disappointed the Tigers were jumped again at the start by the Saints.

“It was better than the last couple of weeks,” he said. “[It’s] clearly something we will continue to look at. Energy was better but again we don’t want to give teams head starts.”

“We’ve been here before,” Cotchin said. “I have incredible confidence in everyone who puts on a Richmond jumper and all our staff that we will work together through this, we will make sure we’re improving during the week.”

Previous Merrett offered one match ban for punch on Silvagni
Next One dead, another injured in shooting at Breonna Taylor protest park