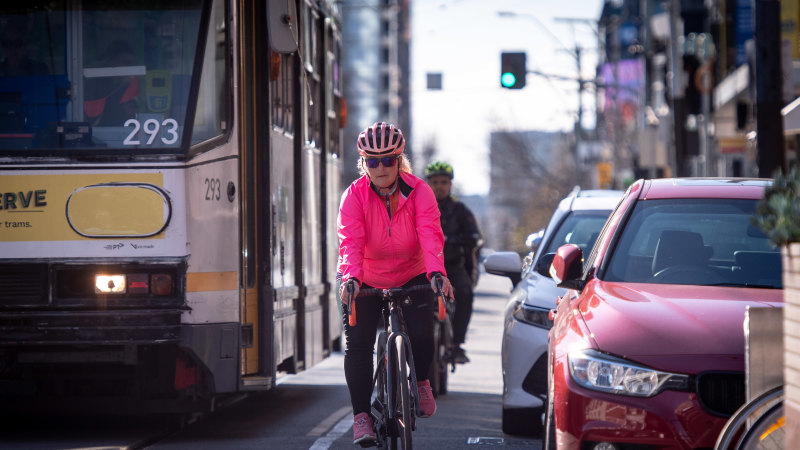 St Kilda Road – which still lacks a cycling lane despite having the state’s highest rate of car doorings – was voted the second-worst place for cyclists, followed by Hopkins Street in Footscray and the infamous Haymarket roundabout in the city.

The project’s online interactive map was made available to users at the height of the coronavirus lockdown, when cyclist numbers spiked, between the end of March and the end of May.

Three-quarters of the 30,000 submissions complained about insufficient or unsafe cycling infrastructure, with many pointing to a lack of cycling lanes and constant fear of dooring.

“As we move to de-congest our cities and make them more sustainable, and want people to rely less on car-based travel, we need to facilitate a safe environment for people to ride,” he said.

Two major roads with separated bike lanes were nominated the safest: Wellington Street in Collingwood topped the list, followed by William Street in the city.

Other favourite sites included new or revamped routes such as the Chandler Highway bridge in Alphington and a temporary Footscray Road bike path created while the West Gate Tunnel is under construction.

Mr Aisenberg said there was no doubt cyclists appreciated alternative cycling infrastructure put in place during construction. “Five years ago, there would have been no diversion for a cycling route,” he said.

But a “fraction” of total infrastructure spending went towards cycling when huge investments in roads induced more traffic, with which cyclists were then forced to contend, he said.

The study found people’s perceptions of cycling safety did not always match locations’ crash histories, with government data from 2016 to 2019 revealing four of the top 10 locations voted as unsafe had fewer than three crashes over three years.

There were 40 crashes on Sydney Road in Melbourne’s inner-north, 26 on Collins Street in the CBD and 55 each on Chapel Street and St Kilda Road.

Mr Aisenberg said governments relied too heavily on crash statistics when prioritising cycling infrastructure and should factor in people’s perceptions of safety, because this dictated where cyclists chose to ride.

Amy Gillett Foundation chief executive Dan Kneipp said he wanted to bring the crowd-mapping project that started in Victoria in 2016 to every Australian state and territory.

“We’ve seen wonderful developments in the inner areas of Sydney, Melbourne, Brisbane and other parts of the country, but we need comprehensive investment to ensure all Australians have access to safe cycling,” he said.

The City of Stonnington will investigate introducing full-time bike lanes on a section of Chapel Street between Alexandra Avenue and Toorak Road, plus trial bike lane protection and in-ground flashing lights in some places.

The RACV named Chapel Street as the state’s top-priority corridor for cycling upgrades.

The state government has promised $27 million to build new separated bike lanes on St Kilda Road, with the long-awaited upgrade planned to open by 2025.

A $1.6 million upgrade of separated cycling infrastructure for the corner of Albert and Lansdowne streets is almost finished.

A government spokesman said works on a range of strategic corridors, including from Clayton to Syndall, from Geelong to Hearne Hill and Box Hill to the Ashburton shared user path have been completed.

“Safety is always our top priority – that’s why we’ve invested $100 million to make our roads safer for cyclists and pedestrians, on top of more than 250 kilometres of shared paths completed or underway as part of our Big Build.”