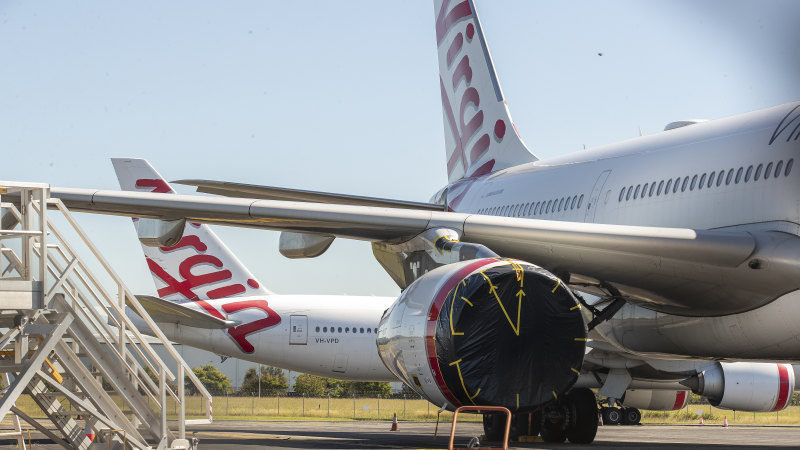 Virgin leases about half its fleet, or 69 aircraft. Bain is planing to strip Virgin back to a fleet of its domestic workhorse Boeing 737s, of which it currently owns 40 and leases 39. However the group has not said how many aircraft it will be left with in total.

The demand is the first challenge to wide ranging orders granted by the Federal Court to protect the Deloitte administrators during the sale process.

Those orders limited the personal liability of the individual administrators incurred by Virgin continuing to fly leased aircraft, airport fees, for use of the Virgin trade mark owned by Richard Branson, and for essential services such as ground handling, fuel, maintenance and in-flight catering.

The orders were also expected to curb any move by the companies that had provided leasing finance to Virgin from repossessing equipment or planes.

Wells Fargo and Willis are seeking a declaration from the court that a notice given by Deloitte to Willis Leasing regarding the status of the leases was incomplete and did not take into account their rights under an international agreement designed to protect aircraft lessors’ rights to make demands against lessees, known as the Cape Town Aircraft Protocol.

The two groups are also seeking declarations that rent must be paid by the airline and its administrators for the use of their property during the course of the administration.

A spokesman for Deloitte said it told Willis last month that it did not claim any continuing interest in the four engines last month.

“Discussions around their collection are continuing,” he said.

Willis is not the first financier to raise questions about the wide-ranging orders. As The Age and Sydney Morning Herald revealed, another financier, Pembroke had also raised concerns about the orders not allowing them to collect rent or repossess the planes they had leased to Virgin.

Previous Ghislaine Maxwell, associate of Jeffrey Epstein, arrested by the FBI
Next We shouldn’t blame those in lockdown – we should thank them