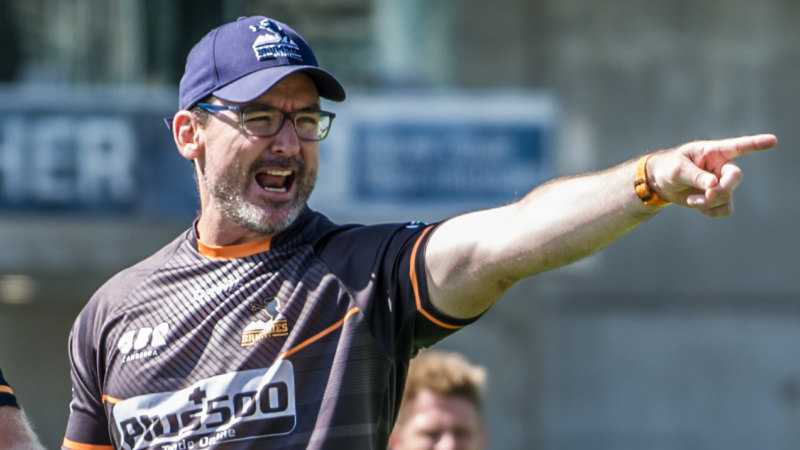 “I don’t know what it was, it was like a lightbulb moment. ‘Go and check your junk email’,” I thought,” McKellar says.

“And there was Laurie’s [Fisher] email, asking ‘what’s your contract situation, there may be an opportunity at the Brumbies’. I couldn’t reply quickly enough. That was October 2013 and I was back in Canberra really quickly.”

Well, almost. Fisher, who had watched the young Queenslander coach the Tuggeranong Vikings to back-to-back premierships in 2011 and 2012, was also about to give up. It had been several days and McKellar had not responded to his email.

“I thought we’d have to go down a different path, but his email was in my junk,” Fisher says. “Coaching is like that. Opportunities come at weird times – sometimes at the best of times and sometimes at the worst of times. Luckily for all of us, the timing was right this time and Dan made an instantaneous decision that it was right for him to come back.”

McKellar took an assistant’s role under head coach Stephen Larkham and Fisher as director of rugby. His Super Rugby apprenticeship, proper, had started. So, too, had his conversion from Brisbane-born, Townsville-raised rugby league fanatic to pride of Canberra and the ACT, and Wallabies coach-in-waiting.

“When people ask me why the Brumbies are a special club, it’s because they provide opportunity,” McKellar says. “They back people, long before I got here. They’ve been doing it from day one. We can never lose that.”

By rights, McKellar should be coaching Queensland. The son of publican parents, Bill and Mickey, McKellar grew up all over the Sunshine State. During the family’s stint in Toowoomba, he played junior rugby league with Shane Webcke. A 10-year-old Dan had a regular Wednesday-night appointment with Ray Warren and the Panasonic Cup. To the bemusement of his father, McKellar would sit in front of the television recording the tackle count.

By halfway through secondary school at Townsville Grammar, the Wallabies exploits at the 1991 World Cup, a few rep side call-ups and the travel that went with them had turned McKellar into a rugby fanatic.

After school he joined the likes of Toutai Kefu, Garrick Morgan, Shane Drahm and Mark Connors at Brisbane club rugby powerhouse Souths. After a short stint in the junior leagues of Ireland, McKellar received the long-hoped for call-up to the Reds, but never earned a cap.

After three seasons coaching first grade at Souths, McKellar and Carla moved to Tuggeranong, a defection of sorts that he now considers the defining move of his career. It brought him into the orbits of Fisher, Jake White and Larkham. He did not waste the opportunity.

Would I love to coach Australia one day? Yeah of course … but I’m in no rush.

“Dan had the three As – an aptitude for coaching, an appetite for learning and ambition,” Fisher says. “If you see all three in a young coach, you’re prepared to spend some time with them.”

Their friendship flourished and came full circle when, four years later, McKellar was promoted to head coach. He brought the veteran breakdown coach back from Gloucester to be his assistant alongside Peter Hewat.

The trio and their support staff have formed one of the most successful coaching partnerships in Australian rugby. Once pilloried in parts of the country for their set-piece dominated style of play, they have unveiled a more balanced style of attacking rugby, with a solid course of set-pieces, over the past two seasons.

It was a necessary but high-stakes gamble McKellar made when he took the reins from Larkham at the end of 2017. But there was a time last season, when the Brumbies were two wins from six games, it looked shaky. Fisher says it was the making of McKellar.

“What I admired last season was when we had a sticky start to the year – we got pumped by the Reds, run over by the Rebels in Melbourne – it can turn pear-shaped from there,” he says.

“We knew we were a good football team but it wasn’t happening for us. Dan’s ability to change a few things up, steer everybody through what was a bit of a crisis, and come out the other end as a flourishing football team, showed not only his knowledge of the game but his skill with people. It was a really good achievement of leadership.”

By all accounts, the Wallabies await. Linked to the forwards coaching role for some time now, the financial fallout to the coronavirus crisis has strengthened the case for one of the country’s brightest talents to be brought into the fold under new coach Dave Rennie.

McKellar, however, seems more interested in doing things well than doing them quickly. The Brumbies are still chasing a title despite dominating the Australian scene and making the semi-finals last year.

“Would I love to coach Australia one day? Yeah of course,” he says. “It’s no different to going out there and asking Reesjan Pasitoa what he wants to do. ‘I want to win a comp with the Brumbies and I want to play for Australia’. Coaches are no different. That’d be nice one day but I’m in no rush.”