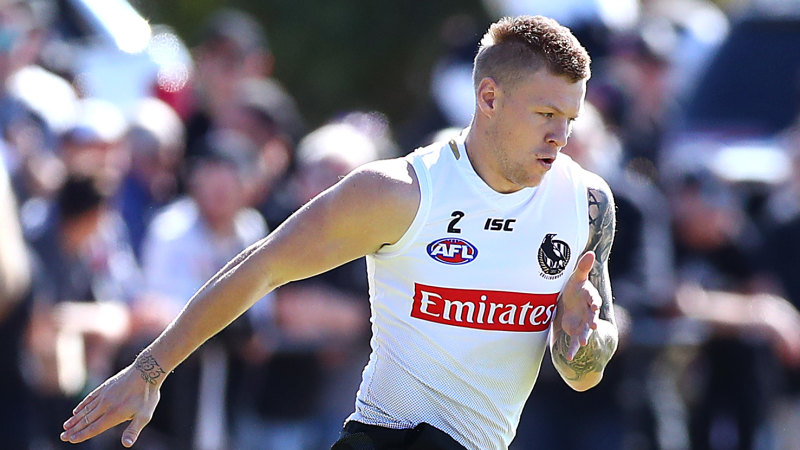 Police said two people have been charged over the alleged incident. The second man charged is not associated with or from the Collingwood Football Club.

“Detectives from the Sexual Crimes Squad have charged two people in relation to a reported sexual assault,” the statement read.

“Two 24-year-olds, one from Hampton East and one from Clematis, have both been charged with indecent assault and bailed to appear at Melbourne Magistrates’ Court [on] 30 October.

“The charges are in relation to an incident, which is alleged to have occurred in Kew in 2015. As this matter is now before the court, police will not be making any further comment.”

The AFL in a statement said it provided “education and ongoing counselling for all parties” at the time of the 2018 probe.

“The AFL confirms in 2018 it was made aware of a matter involving Collingwood player Jordan De Goey from 2015,” the statement read.

“As the legal process has now begun the AFL will make no further comment until it is completed.”

De Goey will not fly to Sydney to play against Hawthorn on Friday, but will go to WA the week after for Collingwood’s next run of games. The AFL said De Goey could only rejoin Collingwood’s football program after he clears two COVID-19 tests.

A source with knowledge of the 2018 AFL and police investigations said they were carried out thoroughly, with multiple accounts listened to, and that they perceived the AFL and the club to have handled the matter well.

St Kilda’s Stephen Milne was allowed to play while facing rape charges from a 2004 incident. They were eventually dropped.

North Melbourne’s Majak Daw was also allowed to play while facing rape charges from a 2007 incident. He was found not guilty in 2015.

De Goey will also face the Magistrates’ Court in September after being caught driving while suspended and using his phone while driving. These are separate matters to the indecent assault charge.

In other indiscretions, De Goey was caught driving with a blood alcohol reading of 0.095 while a P-plater. He was fined $10,000 and told to find employment outside the football club for four weeks.

In 2017, Collingwood suspended De Goey for three matches and fined he $5000 after he broke his hand in a fight and lied about it to his club. De Goey originally said he was injured while playing with his dog.

De Goey is currently without a manager but revealed on Thursday he was in talks with Collingwood for a new contract.

He told the AFL Exchange podcast he saw his future in black and white.

“Yeah I do [want to stay at Collingwood long-term]. Obviously it’s a fantastic club and they gave me the opportunity in the beginning, so I definitely want to stay there that’s for sure,” De Goey said.