Race-by-race tips and preview for Wagga on Monday

admin July 5, 2020 Sport Comments Off on Race-by-race tips and preview for Wagga on Monday 46 Views 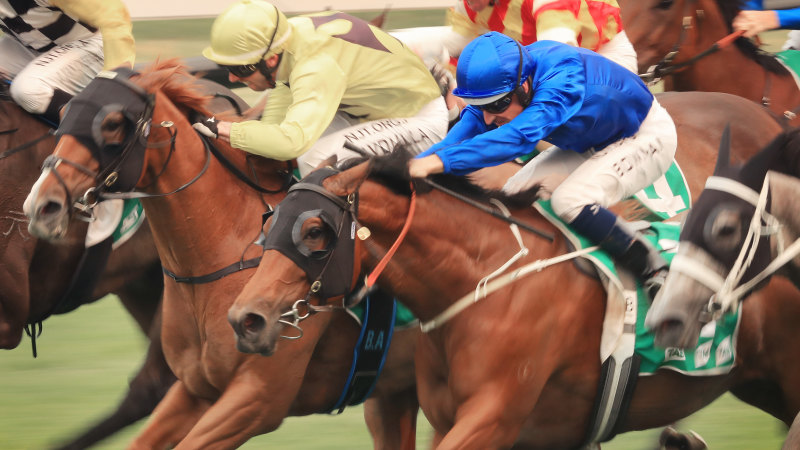 Plenty of chances in this one at set weights. Looks a nice assignment at only her second start for three-year-old Goulburn filly 8. Kez from the Danny Williams stable after having little luck on debut in the heavy at Albury. Was well specked in the market that day, and carries 2kg less here.
Dangers: Goulburn filly 7. Earp has plenty of ability but was run off her feet behind a smart winner at Canberra second-up. Drawn wide and would prefer over more ground, but drops 2kg in weight. Former Victorian three-year-old 2. Celestial Warrior has his first run fresh for new Canberra stable, with a string of gear changes, although not a noted fresh performer. Canberra three-year-old fillies 10. Serb Alert third-up and 12. Stand Your Ground fresh are also capable of charging into the finish sneaking down in the weights.
How to play it: Kez each-way Odds and Evens: Evens

Back to a thinner sprint trip, and going wide with three-year-old filly 9. Thuwaany from the local Chris Heywood stable back in trip off a seven-week freshen-up. Just needs to find some cover from the tricky draw to cut loose and finish over the top at big odds.
Dangers: Consistent Wodonga three-year-old 5. Openhimup hops back over the border after being swamped when leading at Seymour. Was close-up in two previous runs at this track, and regular rider is back on along with blinkers for the first time. Resuming Canberra four-year-old 1. Antonio draws well and likes plenty of sting out of the ground. Was good through the line in a handy open trial; while local two-year-old filly 11. Come Get Me is hard fit and likes to settle back and finish late.
How to play it: Thuwaany each-way and box trifecta 1,5,9,11 Odds and Evens: Odds

Open battle and, of course, some are battling more than others. Improving four-year-old mare 7. War Blues from the Ron Steiner yard just needs to find cover from a wide gate to drive into the finish. Has hit the line well in stronger consecutive Class 2 races and looks well over the odds on her home track.
Dangers: Canberra four-year-old mare 3. Onya Marks hasn’t been far away in stronger races, and looks well placed from a good draw, and with a 2kg claim. Rival Canberra mare 12. Snowbrook comes off an easy win fourth-up in a similar race at Gundagai, and can finish strong from a handy trail. Leeton four-year-old 1. Crimson Hoffa has more than enough ability dropping in grade as well, but draws wide under a huge weight; while local filly 10. Ember led all the way to win her maiden here two runs back and can be included in exotics.
How to play it: War Blues each-way and trifecta 3,7,12/1,3,7,10,12/1,3,7,10,12 Odds and Evens: Odds

Part two for the battlers, and a little more quality here. Like the value about four-year-old Canberra mare 9. Woollahra Lass from the Luke Pepper yard. Has hit the line nicely in her last two, and better suited out to this longer trip on her preferred rain-affected ground.
Dangers: Local seven-year-old 1. Kruanui is the clear threat after finishing hard to win consecutive BM 58 races. Less experienced rider aboard but 3kg claim offsets the weight rise. Rival home-track mare 2. Fashion Tip hasn’t won for a long while, but found the line okay second-up behind a smart sprinter and even better suited over this distance. Expect sharp improvement from Goulburn filly 8. Estaverdi second-up off a long break.
How to play it: Woollahra Lass each-way and box trifecta 1,2,8,9 Odds and Evens: Split

Promising three-year-old Albury filly 8. Star Of Tennessee from the Donna Scott yard destroyed a maiden field from the front resuming in heavy ground at home, and she looks well capable of taking the next step over this trip.
Dangers: Warwick Farm mare 1. Dizzy Miss Lizzy didn’t miss by much third-up in stronger company at Kembla, although she rises 6kg; while Goulburn four-year-old 9. Love Me Broke hasn’t missed a place in three runs this prep, and is best of the rest.
How to play it: Star Of Tennessee to win and quinella 1 and 8 Odds and Evens: Split

Good strong and open contest. Big fan of four-year-old gelding 11. Straover from the Geoff Duryea yard at Corowa, who is building a nice strike rate and relishes rain-affected ground. Just missed twice in a row getting home hard before powering down the middle for a dominant BM 66 win at Albury. More depth here but drops 5.5kg, and wide draw shouldn’t hinder his natural pattern.
Dangers: Plenty of them headed by tough and fit Goulburn six-year-old and perennial frontrunner 2. Assault’n’bathory, who was a dominant BM 70 winner at Canberra four runs back and hasn’t missed a place since. Local five-year-old 5. Real Key has a strong record at home and has been freshened up off a narrow BM 76 win here on the Riverside track. Watch the market on Canberra eight-year-old 1. Great Glen who resumes at big odds off a forward trial and normally runs well fresh.
How to play it: Straover to win Odds and Evens: Split

Intriguing finish in a testing Heat of the Wagga Stayers Series. Progressive three-year-old Warwick Farm filly 5. Aperol Sprint from the Matthew Smith yard steps up in grade and distance from consecutive Class 1 wins at Bathurst. Still on the rise and racing like she will eat up this journey.
Dangers: Tough local four-year-old 1. Jungle Book has won three straight surging home from well back on his home track and loves rain-affected ground, but query jumping to this trip carrying 3kg more. Wangaratta five-year-old 2. Roland Garros was swamped late by Jungle Book in a BM 66 here last start, and hard to see him turning the tables drawn wide.
How to play it: Aperol Sprint to win Odds and Evens: Odds