Super Rugby AU showed us the future, for better or worse

admin July 5, 2020 Latest News Comments Off on Super Rugby AU showed us the future, for better or worse 57 Views 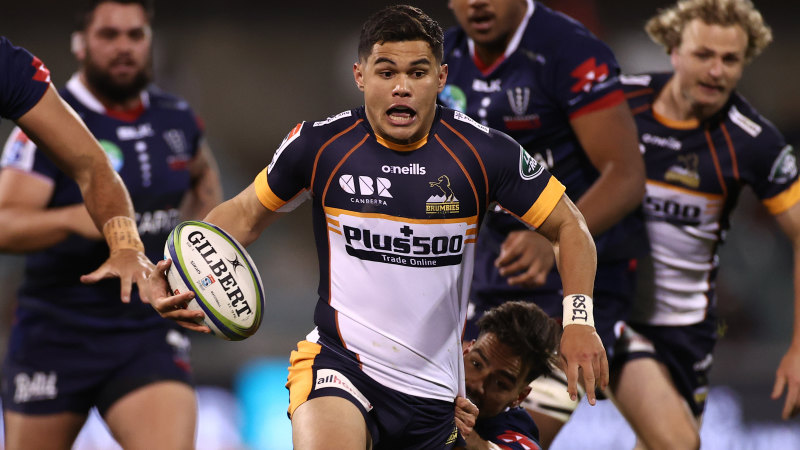 The generation that made history with the 2018 Australian Schools and 2019 Junior Wallabies sides are coming through Super Rugby en masse now and it is not hyperbole to say their arrival is as significant as the arrivals 15 years ago of Will Genia, David Pocock, Quade Cooper, Kurtley Beale and James O’Connor on the Schools and U20s scene.

Better still, the conditions no longer exist for any of the current crop to cultivate the hubris of their predecessors. Professional sport is undergoing a financial reckoning and the ascent of tomorrow’s stars will be appropriately restrained. The Wallabies won’t need a ‘no dickheads’ policy, because the dickheads won’t stick around.

But if you’re sipping from a half-empty glass, they are all still kids, and that means it could be a lean couple of years for the Wallabies, unless new coach Dave Rennie is allowed to augment his first Test squad with a select number of overseas-based players.

Comparisons with New Zealand get tired but it’s impossible not to observe that when talented young players come through over there they are ushered into mature systems. It’s a bit like Matt Toomua’s observation this week of Noah Lolesio and the Brumbies: “… they develop their players right, particularly in that position. He doesn’t play the role where there’s heaps of pressure mounted on him. He has a dominant forward pack, he plays his role very nicely, and he attacks where he needs to. It’s a really good development example for young halves.”

It is a feat of some significance that the Waratahs were able to hold back hyped U20s back rower Will Harris for as long as they did, while Harrison, Bell and Junior Wallabies teammate Mark Nawaqanitawase were thrown in from the start of the earlier 2020 season. Harris made a quiet enough debut against the Reds on Friday night but it was respectable, which is all that should be required of this generation at this stage of their careers.

In isolation the opening round of Super Rugby AU showed us the potential in the Australian system but the thought of a Wallabies squad drawn from that pool pitted against the All Blacks in three months’ time is sobering.

Rugby Australia is still working up its Giteau Law tweaks but if Rennie isn’t allowed to draw on some of the experience overseas − Izack Rodda and Sean McMahon jump to mind − it could be a very lean year indeed for the Wallabies. It will test the patience of fans, and also Rennie’s ability to sell his vision of the future while delivering incremental gains. That’s fine in theory, but by the third Bledisloe Cup drubbing Wallabies supporters could be turning off in droves.

Ratings dilemma
The opening round of the all-Australian competition confirmed rugby’s new normal: niche status. While Essendon v Collingwood attracted a combined 1.2 million across Seven (870,000) and Foxtel (251,000) and Parramatta v North Queensland drew 747,000 (500,000 on Nine and 246,000 on Foxtel), Australia’s version of the derby blockbuster, NSW v Queensland, managed 69,000 on Foxtel.

The number itself is in status-quo territory for recent seasons and it does not include viewers on streaming service Kayo, which does not release figures. Foxtel has also dropped subscribers over the past six months, so the counter argument is that to hold ground, however small, is a win. But the AFL and NRL are in the same boat and the point with their ratings is that it was with their free-to-air partners that they made big gains this season.

Rugby’s most recent deal saw a Sunday morning replay of one Super Rugby game on FTA partner Ten, but a RA spokesman confirmed that had been dropped for Super Rugby AU. It is also true that replay delivered poorly for RA in terms of viewers − something like 5000 in the first attempt at the 2020 season.

The consultants who advised axed chief executive Raelene Castle on negotiations for next year’s deal viewed FTA exposure as critical for the sport’s rebuild. Castle could not deliver a deal before her departure and it remains to be seen whether her interim replacement, Rob Clarke, will have the luxury of holding his ground on this point in the face of a much softer broadcast market.

Officious officiating
Some things never change. The glass-half-full brigade would have enjoyed the debut of the new rules covering goal line dropouts, cross-field kicks, touchfinders and the 20-minute red card (the Hurricanes’ Scott Scrafton copped a yellow and a red in Sunday’s Aotearoa match).

The stats lent cautious validation. The two Australian games averaged 31.3 minutes of ball-in-play time, which is a 90-second improvement on last season. The Kiwi games have improved week-on-week to hit 34 minutes, which is comparable to a good Test match.

Turnovers and penalties were also marginally lower in both competitions, and should continue to trend down as referees bed down under the new systems.

And yet there were the same old complaints. Consistency was poor, typified by Ben O’Keeffe’s penalty call for a late and reckless hit on Hurricanes’ halfback TJ Perenara on Sunday. With the Hurricanes’ Scrafton sitting in the sin bin for a cumulative team yellow, the commentary team was scathing. “There were certainly no arms in the tackle, it was certainly late, and it was high. Apart from that it was good!” they mused. In Friday’s game in Brisbane, endless scrum resets overshadowed some entertaining deployment of the 50/22 rule and goal-line dropouts.

Overall, the combined 118,000 who tuned in on Friday and Saturday were treated to some solid fundamentals, including competitive games and a glimpse of a brighter future. Neither of which were guaranteed a mere two months ago.