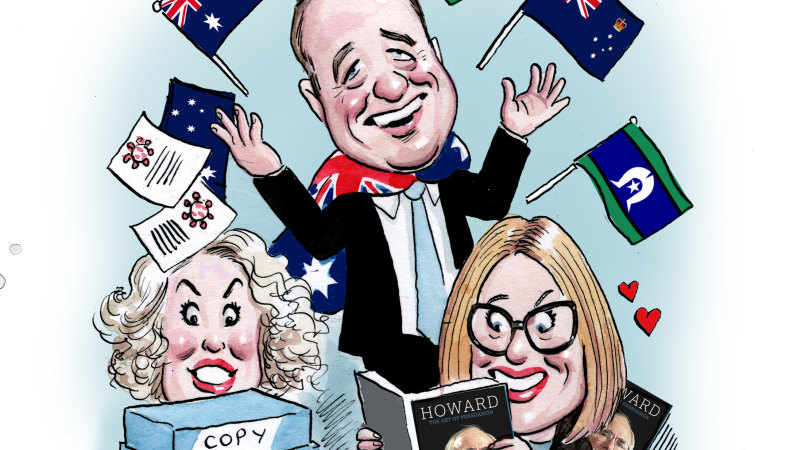 “We actively promote flying new, crisp flags by community groups and schools as an expression of civic pride,” the self-described “modern liberal” said. “We also get many requests from RSLs for veterans’ funerals.” Presumably a booklet his office produced to celebrate Flag Day on September 3 each year has also stoked demand.

Meanwhile, it’s likely Canberra Labor MP Alicia Payne can’t get much of a foot in her office, after shelling out almost $3500 on photocopy paper.

When contacted on Monday, Payne’s staff confirmed the office had completed a bulk stationery order, but said the photocopy expense related to two direct mail-outs to the electorate, including a COVID-19 warning.

“And it wasn’t photocopy paper,” Payne’s electorate officer said. “It was revived, recycled 300 GSM cardboard.” Thank God for that.

If outgoing Senator Mathias Cormann’s colleagues are claiming any surprise at his plans to leave politics, the shopping list of hopefuls circling his Senate spot says otherwise.

On Monday, members in his West Australian Liberal branch said that even though they had long known of his exit plans, they had been surprised by the timing of his announcement.

“I’d always thought it would be October, closer to the end of the year,” one Liberal MP told CBD. “It’s a long time to plan,” said another Liberal member.

On Monday, Everingham – who is close to Attorney-General Christian Porter and a member of the Federal Government’s COVID-19 IR steering group – said he was weighing up the position. Others regarded as contenders include Wesfarmers project principal Rick Newnham, Property Council of WA executive director Sandra Brewer and one-time Curtin hopeful Anna Dartnell.

An update to Scott Morrison’s register of members’ interests caught our eye last week. For the uninitiated, that’s the database in which MPs need to log things they own – as well the swag they get in the job.

The latest addition to the PM’s haul? An honorary membership of the City of Sydney RSL Club.

While the gift is not so significant in monetary terms (a one-year membership costs $5, with the 30-year option terrific value at $110), it comes at a perfect time, as NSW clubs open for business after the COVID-19 lockdown. Punters are said to be flocking back.

Things aren’t rosy, however, for all RSLs. Down in Victoria there’s a battle going on over the future of the state’s RSL arm.

A campaign by younger veterans to topple the old guard at Anzac House was put on hold recently after the AGM scheduled for next month was delayed until November due to social distancing. Apparently organising a veterans’ Zoom call was a bit too hard.

That hasn’t diminished the appetite for regime change, however, with the latest salvo by the reformers aimed squarely at what they say is poor financial management by the current executive led by state president Robert Webster.

They’ve highlighted the RSL’s minutes from April which reveal a $2 million loss for 2019, due in large part to writing off debts to sub-branches that have no prospect of paying up. It’s news that’s not expected to go down well.

“Reporting a loss of this magnitude will need to be explained to the membership,” the minutes note.

Of course, this comes before the summer bushfires and COVID, which have placed further financial pressure on venues to stay afloat. Poker machines have been shut off in Victoria for months and are due to be switched back on later this month.

But the rebels say the situation shouldn’t have gotten this bad to begin with. The group is pushing for the RSL to get out of pokies all together.

Labor leader Anthony Albanese pulled into Canberra’s popular Kingston Hotel on Sunday evening with some staff for a quiet drink after a long weekend on the Eden-Monaro hustings. Fortunately, he wasn’t there long, leaving in time to see his beloved South Sydney Rabbitohs kick-off against Canterbury Bulldogs.

A good thing. By 9.15pm police were called to the watering hole after a 44-year-old was killed in a fight, with some staffers asked for information about anything they saw. The investigation continues.