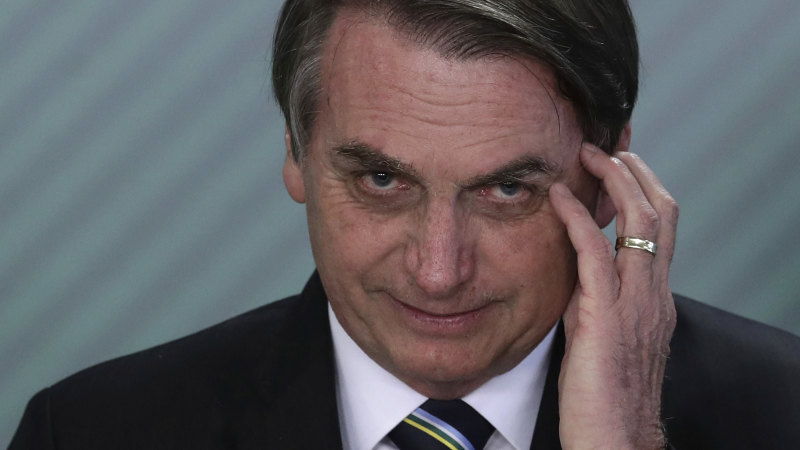 “Thank you to all those who prayed for me, cheered for me. Those who have criticised, no problem, you can continue to criticise at will.”

Bolsonaro has repeatedly played down the impact of the virus, even as Brazil has suffered one of the world’s worst outbreaks.

More than 65,000 Brazilians have so far died from COVID-19 and more than 1.5 million have been infected. Both numbers are the world’s second-highest totals, and are considered to be undercounts due to the lack of widespread testing.

The President has often appeared in public to shake hands with supporters and mingle with crowds, at times without a mask. He has said that his history as an athlete would protect him from the virus, and that it would be nothing more than a “little flu” were he to contract it.

Late on Monday, however, a video posted on YouTube showed a masked Bolsonaro trying not to get too close to supporters who awaited him in front of the presidential palace.

He told them he was following social distancing orders from a doctor after experiencing fatigue, muscle pain and a fever. He added that an exam had shown his lungs were “clean”.

“I came from the hospital,” Bolsonaro said on Monday evening in comments broadcast by a pro-government YouTube channel. “But all is good,” he added.

Over the weekend, Bolsonaro attended several events and was in close contact with the US ambassador to Brazil during July 4 celebrations. Pictures of the event showed neither wearing a mask.

The US Embassy said on Twitter on Monday, local time, that Ambassador Todd Chapman was not showing any COVID-19 symptoms but would be tested.

Bolsonaro could be seen coughing during a broadcast on his social networks on Thursday, when he sat next to six other people, none of whom wore a mask. Officials who were present included Regional Development Minister Rogerio Marinho and the chief executive officer of state-owned bank Caixa Economica Federal, Pedro Guimaraes. Since then, he has also mingled with members of his administration and the general public.

Bolsonaro has repeatedly said that there is no way to prevent 70 per cent of the population falling ill with COVID-19, and that local authorities’ measures to shut down economic activity would ultimately cause more hardship than allowing the virus to run its course.

Brazilian cities and states last month began lifting restrictions that had been imposed to control the spread of the virus, as their statistical curves of deaths began to decline along with the occupation rate of its intensive-care units.

Brazil, the world’s sixth most populous nation, with more than 210 million people, is one of the global hotspots of the pandemic.