Rowell out for three months after opting for shoulder operation 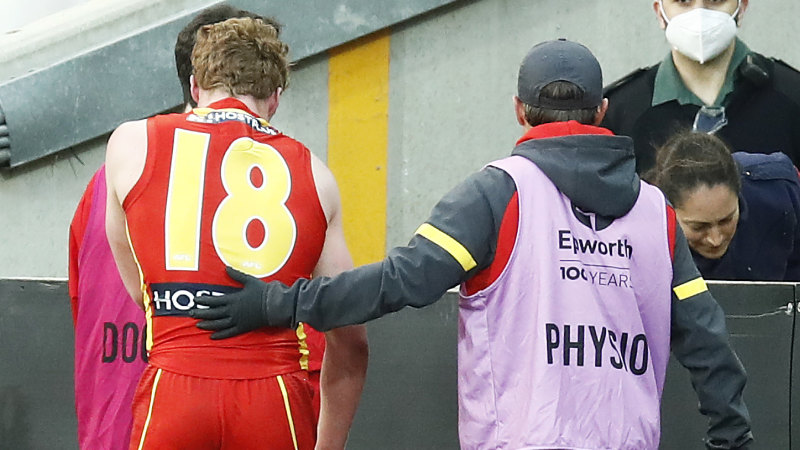 “We wanted to make sure that Matt’s parents and Matt himself had really good input and a good understanding of the options available to them.”

He said the rehabilitation time for such injuries was normally about 12 weeks but it was difficult to predict how long it would take Rowell to recover.

Rowell had taken the competition by storm with consecutive best on ground performances in rounds two, three and four after being the No.1 selection in the 2019 national draft. He was injured early in the match against Geelong when Cats’ midfielder Brandan Parfitt tackled him to the ground.

The respect with which he is already held within the competition was shown when former Suns’ skipper Gary Ablett, who returned to the Cats last season, told Rowell post-game he was happy to share his own experience recovering from an injured shoulder when his rehabilitation began. Cats’ skipper Joel Selwood, who has praised the young Sun on social media, also made his way to Rowell to wish him all the best.

Rowell’s decision to take the operation came on the same day the Giants announced that their 22-year-old best and fairest winner Tim Taranto was available for selection after having an operation to repair the shoulder he dislocated in the Marsh Series.

Taranto has spent 18 weeks in rehabilitation with the Giants deciding an operation was the best course of action given his age and the stage of the season when it occurred.

With the AFL unable to confirm when the season will end due to the coronavirus pandemic it’s impossible to predict whether Rowell will play for the Suns again this season however the club is expected to take a cautious approach to ensure their star asset does not suffer any lingering effects from the injury.