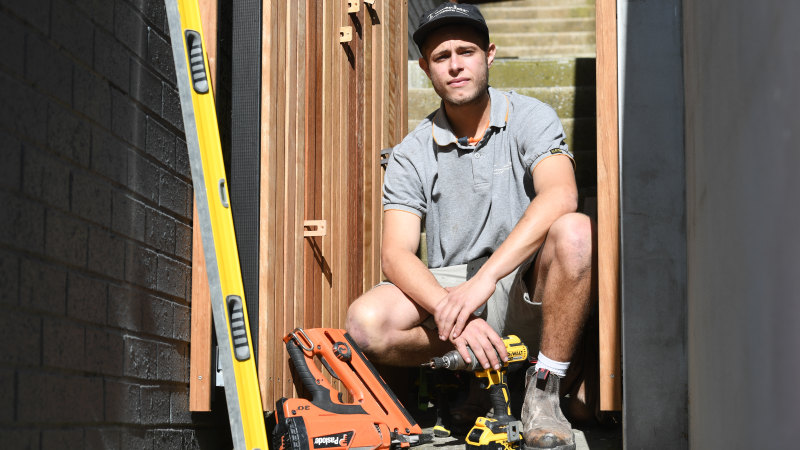 First and second-year apprentices have been hardest hit by job losses during the coronavirus pandemic.

Fouth-year apprentice carpenter Jayden Fleischer, 19, from St Ives in Sydney, lost his job in late March but found another one a few weeks later after he posted his details on a social media site for job seekers on the northern beaches.

“It was getting a bit tough but I did get through it,” he said. “I just put my name out there and I was lucky enough to have a few people reply.

“It can shake your confidence … but I got past all that.”

Mr Fleischer, who has completed a certificate III qualification in carpentry, hopes to get into project management and own his own business when he develops his skills.

Chief executive of the Global Apprenticeship Network Gary Workman said there had been some increases in advertised vacancies in the building and construction industry.

The Business NSW report found the overall decline in new apprenticeships combined with the cancellation of 20 per cent of existing apprenticeships “will be catastrophic for the availability of skills in the future” after federal government subsidies stop on September 30.

“Without significant intervention, we forecast that only around 180,000 apprentices will be in training in 2021, reducing Australia’s skilled workforce pipeline to levels not seen since 1998,” the report warned.

“This will have a lasting impact on business viability and future jobs. With the number of apprentices not recovering to pre-COVID levels until 2025 at the earliest, businesses will be left facing a significant shortfall in the availability of skilled workers at a time when the economy is likely to rebound.”

The report said “it is entirely possible that 30-40 per cent of in-training apprentices will lose employment before the end of 2020 without significant recovery in the economy and extension of existing employer supports”.

Mr Cartwright urged the federal government to extend its Supporting Apprentices and Trainees subsidy for a year beyond its October 1 expiry date. Business NSW has also called for a $540 weekly wage subsidy to help employers hire and retain apprentices.

A national survey of 6311 apprentices found 43 per cent of young people working before the COVID-19 pandemic had since been stood down or were unemployed.

The survey found a total of 25,038 apprentices and trainees had been stood down, suspended or cancelled since March.

A spokeswoman for the Employment Minister Michaelia Cash said the federal government understands the significant impact COVID-19 has had on employers and employees, including apprentices and trainees.

“That is why it is providing a range of support to employers and apprentices to encourage continued participation in the Australian apprenticeships system,” she said.

“During these unprecedented times, suspensions have been higher than the same period in 2019 as employers seek to suspend their apprentices rather than cancelling their training.

The spokeswoman said about 2800 suspended apprentices or trainees returned to work in May and June.

Previous CBD Melbourne: Kearney and Coker jump to the Left
Next National cabinet to decide on hotel quarantine, cuts to flights