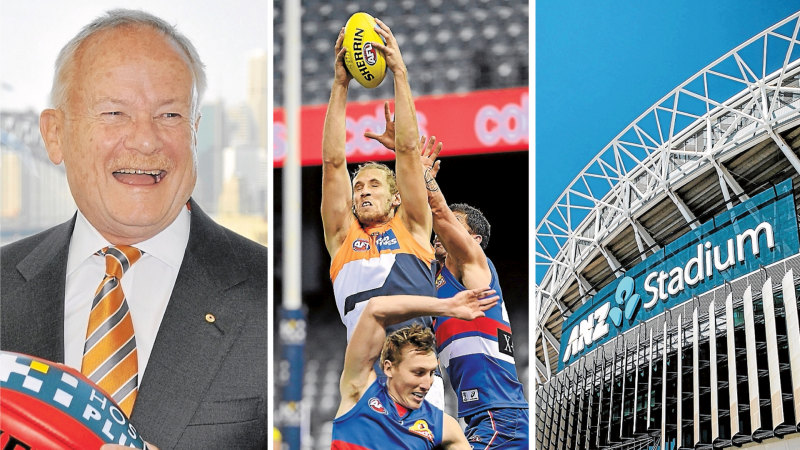 Shepherd will oversee ANZ Stadium when the SCG Trust, which he chairs, merges with Venues Live, the organisation that runs the Olympic Park ground, Bankwest Stadium and several others throughout the state.

Even if the merger was not taking place, Shepherd said he would still advocate for ANZ Stadium – which, at 83,500 seats, is Australia’s biggest stadium besides the MCG – to host the grand final, especially given NSW’s handling of the coronavirus.

I know Peter V’landys well … rugby league is taking off under him. That means AFL has got to lift its game, basically.

“It’s got 70,000-plus capacity, it’s an oval, the site of the world’s best modern Olympic games – it’s a very deeply emotional stadium for Australians,” Shepherd told the Herald and The Age.

“This is a unique opportunity to follow [the AFL’s] investment – for which I’m very thankful and very proud of being part of – and take the game even further in NSW and in Queensland as well. I think it’s the most sensible place to do it in.

“All the northern clubs will be pressing for a northern grand final, I’m sure – I don’t think we’ll be lacking support.

“I know it’s a difficult decision for the AFL, but NSW certainly is probably more user friendly in this department and has got a good record so far in protecting its citizens, which is great.

“NSW has had that wonderful balance – touch wood, you don’t want to criticise anybody, there but for the grace of god goes I – between restrictions and care, and loosening up when it’s safe to do so.

“I think it’s a good, safe state to be based in, frankly. I’d be very happy to see the grand final played at the ANZ, and of course the Giants will be there and we’ll win.”

ANZ Stadium hasn’t staged an AFL fixture since the 2016 qualifying final between the Swans and Giants. With a planned $810 million renovation scrapped because of COVID-19, it remains fully equipped to host AFL games but venue organisers would need a month’s notice to complete maintenance work around its retractable stands before it is ready.

State governments in NSW, Queensland and Western Australia have all expressed an interest in hosting the grand final.

Shepherd agreed with Pridham’s view that the AFL’s expansion was under threat in the northern states by the resurgent NRL, led by Peter V’landys.

“I know Peter V’landys well, I regard him as a good friend and colleague. I’m on the board of Racing NSW, I think he’s an outstanding administrator and rugby league is taking off under him. That means AFL has got to lift its game, basically,” he said.

“I think there’s an opportunity though. AFL is increasingly popular among younger people. It’s got the right demographic going for it. Our girls at school and what have you, all of their friends love AFL, they’re all hooked on AFL now, it’s become the trendy, cool thing to be involved with.

“You’ve got to follow through now. I’m not saying you have to spend mountains of money but you certainly don’t want to relax.”

Shepherd also paid a glowing tribute to AFL boss Gillon McLachlan and his executive team for keeping the competition going in such difficult circumstances, but now wants to see as much done as possible to maximise crowds in the northern states.

“The Cats versus Lions in Sydney on Thursday night, that’s never going to happen again. You’re not going to make a lot of money out of it but you’d certainly help promote the game,” he said.

“We should take advantage of whatever we can do to get the maximum attendance to each game, even if it’s a sub-optimal number in terms of the cost of putting on the event and running the venue.

“It’s a good time to follow your money. And I don’t want to be harshly commercial, but 53 per cent of the population is in NSW and Queensland, and if you can get a good pro-rata share of that in terms of TV viewership, you’d make up a lot of ground in lost media rights.”