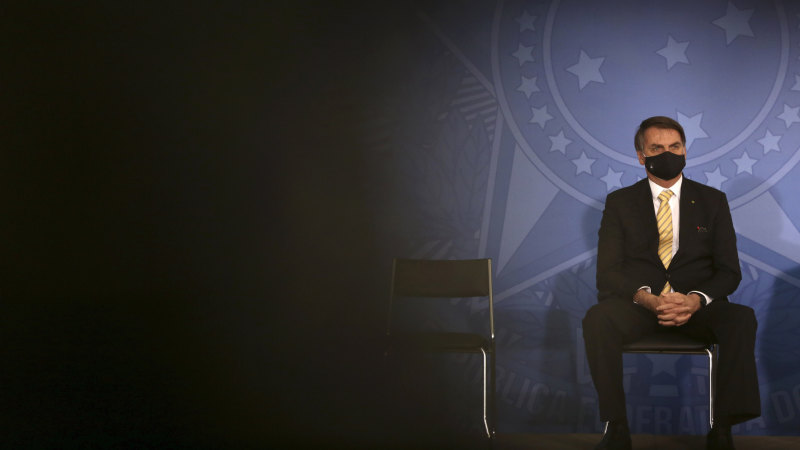 “The President took the right approach,” Congressman Jose Medeiros, the government’s deputy leader in the lower house, said in an interview. “He will be proven right that there was no way we would stay hiding in our homes.”

Critics blame Bolsonaro for creating a public health disaster as the country’s politics have grown increasingly polarised and toxic. They accuse him of putting the lives of supporters and others at risk and promoting unsafe socialising, thus contributing to the death toll. Brazil’s largest daily, Folha de S.Paulo, published an op-ed titled “Why I am cheering for Bolsonaro to die”.

Brazil trails only the US with more than 65,000 confirmed deaths and more than 1.62 million total cases. Its response has been erratic partly because of Bolsonaro’s insistence that shutting down the economy would be more dangerous than the virus. Governors have rejected his advice and imposed various lockdowns in recent months but his refusal to back those steps has made enforcement harder.

His argument has been that the virus can’t be escaped or beaten and the country has to learn to accept it. As he said after the result, “This virus is like the rain. It’s going to get you.”

Bolsonaro has had recent health troubles that could complicate his condition. In September 2018 while campaigning for president, he was stabbed in the abdomen, leading to multiple surgeries. For months, he relied on a feeding tube and colostomy bag.

Thomaz Favaro, a Sao Paulo-based analyst for the consultancy Control Risks, says Bolsonaro’s illness could help shift the conversation to the state of his health rather what he’s doing to control the pandemic.

“It’s a lot easier for him to answer questions about how he is feeling and whether he was able to exercise, rather than what your government is doing to address the latest 1000 deaths,” he said.

Bolsonaro, 65, is already making a point of keeping up a sense of normality. So far, the only adjustments to his agenda have been cancelling two trips to regional areas and turning face-to-face meetings into virtual ones, according to two officials speaking on condition of anonymity. They said his symptoms remained mild.

Marcio Coimbra, a political scientist with Interlegis, a Brasilia-based think tank, says that barring severe illness Bolsonaro will now feel vindicated in prioritising opening the economy at all costs. But the health of his cabinet remains in question after his frequent meetings with ministers without a mask.

“Many of them are potential high-risk patients and could develop strong symptoms – something that may end up harming Bolsonaro’s narrative if he recovers fast and easy,” Coimbra said.

Bolsonaro generally refused to use a mask in public and even battled a court over an order forcing him to, insisted on maintaining close-quarter meetings with his advisers and inner circle. According to data collected by Bloomberg of Bolsonaro’s recent agenda, the President has met more than two dozen senior government officials in the past week.

On Saturday, he attended a lunch in honour of July Fourth, the US Independence Day, at the residence of US Ambassador Todd Chapman. Chapman and his wife tested negative but would remain in quarantine, the embassy said.

Key advisers, such as the chief of staff and general secretary, have also tested negative. His minister of defence was tested on Tuesday morning and was awaiting the result.

Investors are carefully following the next steps and health of Economy Minister Paulo Guedes, who has promised a rash of reforms as Brazil faces a looming recession. The minister, who is 70, tested negative last week and will be tested again in the coming days, his office said.