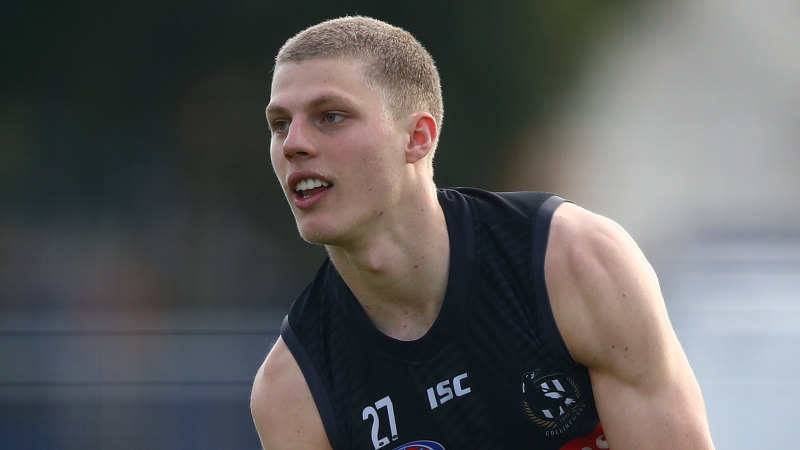 Kelly was drafted by the Pies in 2018 as a key defender but has since thrived at the other end of the ground.

“Will’s done really well. Obviously 18 months in, and has had his injury issues over the last two or three years. His pre-season was super,” Buckley said.

“Moving him forward late last year we think has been a good move, and his form’s been that consistent that he’s warranted his opportunity on Friday night. A player who although he’s got good size moves around really well, very agile, work rate through the roof, a young fella that’s earned his opportunity. The players are pumped to see him get his chance.”

Collingwood’s forward line has been spluttering this year, kicking goals in bursts then being unable to score for entire quarters.

Craig ‘Ned’ Kelly was a key backman in Collingwood’s 1990 premiership team. The Kelly family will be unable to be at the ground in Sydney to see the debut in person due to Melbourne’s lockdown.

Collingwood will field five father-son players in the one team when Kelly plays and assuming the other four players – Darcy Moore, Josh Daicos and Callum and Tyler Brown – all hold their spots. Tyler Brown is the most vulnerable at selection after playing just a handful of games and struggling to have an impact in recent weeks.

Craig Kelly, now a prominent and influential player manager as the owner of player agency TLA, self-deprecatingly said when his second son was drafted that he was a far better player than he was because he was a better mark, kick and was faster and besides that he didn’t pinch anyone.

Big-bodied midfielder Brayden Sier is also close to selection in the senior team after another best on ground effort in the practice match.

Wingman Tom Phillips didn’t train with the rest of the Pies group on Wednesday.

Buckley said he has urged Cox to lift his game, but said the key forward had plenty of company in last Friday night’s loss to Essendon.

“You’ve got to do better. There’s a few boys in that boat. We estimated that we had over a dozen players that didn’t execute their role,” Buckley said.

The Pies head into Friday night’s clash in 10th spot on the ladder on the back of consecutive losses and following a fortnight of unwanted off-field headlines.

However Buckley said the Pies weren’t that far off the pace.

“Our form is not tragic but we do have some work on-field to do and we’ve been able to focus on that,” he said.

But to beat the Hawks, Collingwood must arrest an atrocious recent record against Alastair Clarkson’s side, which has won 12 of the clubs’ last 13 matches.

Collingwood are spending the week in Sydney before venturing to Western Australia where they are due to spend three weeks, with matches against Geelong, West Coast and Fremantle at Optus Stadium.

Previous What alternative do we have in this crisis?
Next Titans reportedly raise offer to $1.25m in bid to lure David Fifita from Brisbane