Race-by-race guide and tips for Scone on Friday

admin July 9, 2020 Sport Comments Off on Race-by-race guide and tips for Scone on Friday 42 Views 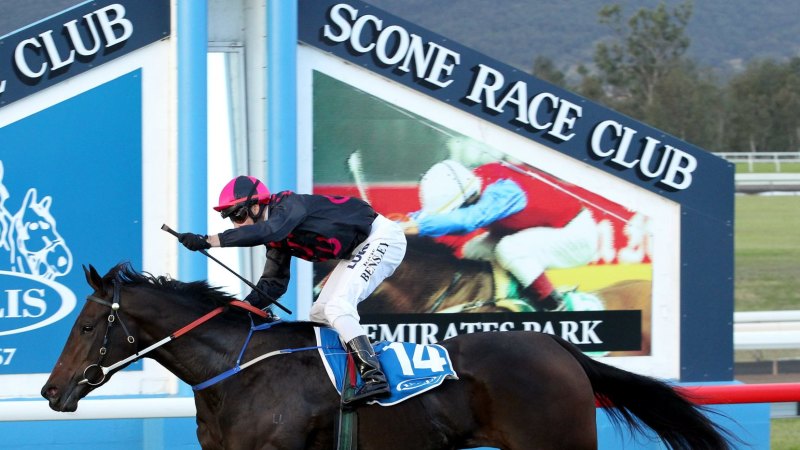 Back to the flying trip, and it’s very tricky. Keen on 3YO Muswellbrook filly 5. Owhata Crumpet, trained by Pat Farrell and resuming off two sharp trials for only her second start. Leading country rider is on, and any rain would be a plus.

Dangers: Front-running filly and former Victorian 3. Be Brilliant has her first run for the Nathan Doyle yard at Newcastle third-up and should give a sight with winkers going on. Watch the betting on local 2YO and first starter 9. Spo Dee (Rubick x Decantered by Flying Spur) who has had no recent public trial, but in good hands and can fly with blinkers on. Local filly 6. Shukkas was run off her feet at big odds behind a promising one, but blinkers have been applied and she gets a 2kg claim. Include home track 2YO 7. Ananagram second-up if you’re playing the exotics; as well as 2YO Gosford filly 10. Red Dress who resumes for only her second start off a smart trial win.

How to play it: Owhata Crumpet to win.

Looks a race in three. Newcastle 3YO 1. Two Up from the David Atkins yard will be hard to beat fourth-up back in trip and on firmer ground, and best form by far is on this track.

Dangers: Progressive Tamworth 3YO 5. Farmer’s Friend resumes off two quiet trials, with blinkers removed. Has plenty of ability and scored a dominant maiden win here at second start tracking the speed. Gosford 5YO 3. Khitaamy has a modest strike rate but has been freshened since hitting the line nicely in handy company in his last two and gets back down to a competitive weight.

Odds and Evens: Odds a special.

This looks a simple put-in-and-take-out job for hot favourite and now 3YO gelding 1. Remlaps Gem from the local Scott Singleton yard after a dominant debut win here in good time, and the second horse then came out and charged over them easily at Grafton on Wednesday.

Dangers: Doubt there are any, but if improving Gosford 4YO 6. Geotime slots in from the wide draw, he can charge home into the quinella. Finished well two runs back at Armidale before doing best work late after a tough run here in a field with good depth. Include Newcastle filly 7. The Spell and Quirindi mare 10. Snipex Abaa if you’re playing the wider exotics.

Tamworth 3YO 3. Manseneta is a promising middle distance and staying type from the Cody Morgan stable who can strike fourth-up. Powered home from well back to bolt in his maiden before just missing in a dogfight here when again coming from well back. At peak fitness, with the single blinker on, and primed to finish over them.

Dangers: Improving Randwick 3YO 1. Most Welcome hasn’t missed a place this prep off a long break, and drops in grade from finishing close-up in a BM 66 at Bathurst. One of three Kris Lees-trained runners, 4YO mare 9. Tessa Burrito, hit the line hard first up at Muswellbrook in heavy ground and has run three placings from five starts at this track. Stablemate mare 5. Wild Sheila hasn’t reproduced the form of her dominant first-up maiden win at Hawkesbury but is better suited back to the mile. The third stablemate 4YO 2. Bandahara has been up for a while, regularly finding the line well in handy company without winning. Up in weight and drawn the fence, which may not suit his off-speed style. Another Novocastrian, 3YO 6. Reuben James, steps up in trip from a narrow defeat on a Heavy 10 at Tamworth, and will appreciate firmer ground.

Open battle for the maidens. Loved the second of two trials at Muswellbrook from lightly raced home track 3YO 1. Total Recall resuming for the Paul Messara yard. Was truly run, yet he cruised home a few lengths off the winner under a tighter hold than anything else in the trial, and on debut last prep missed by a whisker over 1400m at Tamworth when a heavily backed favourite.

Dangers: Plenty of them headed by Newcastle filly 4. Whatsin who got home hard resuming in the heavy at Port Macquarie, and drawn to be tucked away with cover back in the field and produced late. Talented 2YO Randwick colt 2. Easy Campese was okay first-up in a good maiden at Hawkesbury when a little green, and can improve over more ground on a firmer track. Liked the debut here of 3YO local filly 5. Don’tforgetmonica who found the line. Bred to appreciate more ground and blinkers come off; while include Randwick filly 6. Malfy (Dundeel x Belle Giselle by Redoubte’s Choice) who debuts in blinkers from a soft draw off a recent sharp trial.

How to play it: Total Recall to win.

Progressive 3YO local gelding 2. The Snooperstar from the Mark Schmetzer stable looks well placed third-up crying out for this distance. Won his maiden resuming before doing best work late in a similar race over 1100m. Has the strongest final 400m in the race.

Dangers: Randwick 3YO 4. Cosmic King is a clear threat resuming for only his second start off two controlled trials after sweeping home for an impressive debut win at Goulburn five months ago. Rival Randwick 3YO 3. Holy Sunday also resumes off two trials. May need the run but draws to get plenty of cover and likes to settle well back and rocket home. Home track 4YO 1. Niccirose improved into his third-up run here when overhauled late. Gets an easier time from the inside draw but query under the weight and out to this trip.

A competitive battle to finish, and there are plenty of chances. Lightly raced 3YO local gelding 4. Eiger from the Brett Cavanough yard hasn’t won for a while, but looks well placed second-up over an ideal trip. Was competitive in much stronger metro company earlier in the year and blew out the cobwebs resuming in a handy CL3 at Grafton.

Dangers: Local 5YO 1. Oneness gets back out to his pet trip after finishing close-up in a strong BM 85 sprint here behind a prolific winner. Took on superior metro sprinters three runs back but has to carry a big weight from the inside draw. Newcastle 3YO 12. Mister Zee is hard fit and found the line well in a deep CL3 here last start when well backed. Talented 5YO 3. Czechoslovakia is also having his first run for the Doyle yard at Newcastle fourth-up since switching from Victoria. Has enough ability in this grade but best form is clearly on rain-affected ground.

Previous One on one: Tigers’ summer sales pitch to Mitchell before Doueihi signing
Next NSW grants exemption to Victorian teams as A-League chief faces uncertain future