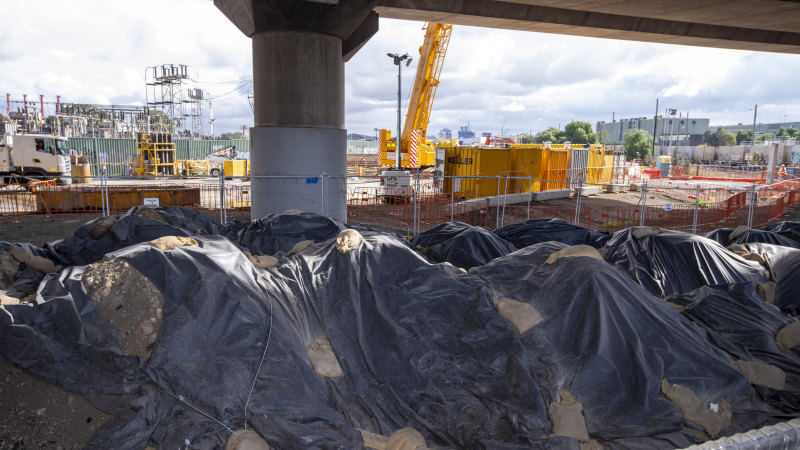 A soil processing site must be 200 metres away from schools, homes and health services – closer than the 500-metre buffer currently in place for landfills.

The government will also give up an estimated $200 million by allowing the project’s waste to be dumped in a separate “containment system”, which is identical to a landfill cell but does not attract the $66-a-tonne levy.

This will solve the concerns of builders CPB Contractors and John Holland that up to 3 million tonnes of PFAS tunnelling soil would have to be dumped into landfill instead of being reused because of the Environment Protection Authority’s beefed up rules on PFAS.

However, the 700,000 tonnes of soil already dug up on the project must be sent to landfill, triggering the levy.

Operators Maddingley Brown Coal in Bacchus Marsh and Hi-Quality in Bulla submitted their tenders earlier this year to take soil from the project. Cleanaway in Ravenhall is also poised to submit its tender.

“The exercise appears intended, once again, to facilitate or fast-track commercial outcomes and use the state to solve a commercial headache at the expense of displacing the problem onto communities,” Mr Lindsay said. “The nature of the regulations themselves suggest lesser and unacceptable standards will be implemented.”

In a letter to the EPA about the regulations, Moorabool Shire Council chief executive Derek Madden said operators were simply required to submit an environmental management plan, which didn’t have to meet any “empirical standards”.

The regulations were an “enabler that will allow MBC [Maddingley Brown Coal] to take spoil from the West Gate Tunnel”, he wrote. “It throws into serious question the balance of the regulatory regime in relation to that spoil.”

Mr Sweet said it could also create the unintended consequence of landfill sites storing the Metro Tunnel soil being in breach of the regulations if they do not have the newly prescribed environmental management plan.

Peter Anderson, chief executive of the Victorian Waste Management Association, said it was unfair the West Gate Tunnel’s builders would not have to pay the landfill levy when other businesses still had to.

But the Victorian head of national employer association Ai Group, Tim Piper, said it made sense for the government to waive the landfill levy as this would have blown out the project’s costs considerably, which would have been passed on to taxpayers.

The state government said the rules would ensure that low-risk soil from tunnel-boring machines can be managed and disposed of in a safe way. Transurban played no rule in developing the regulations, a spokeswoman said.

“These regulations have been brought in specifically to safely manage low-risk tunnel spoil – the low contamination level means it’s unnecessary to send the spoil to landfill,” the spokeswoman said.

A DELWP spokesman said the EPA was confident that the levels of PFAS in tunnel spoil, with appropriate controls, “would not impact the community or environment”.

The rules would have been covered off in the new Environment Protection Act that was delayed a year due to COVID-19.

The regulations were published as the state government, Transurban and the joint building venture face off in the Supreme Court over costs and delays relating to the disposal of the project’s PFAS contaminated soil.