As it happened: Easy win for Pies, Kelly injured on debut

admin 3 weeks ago AFL Comments Off on As it happened: Easy win for Pies, Kelly injured on debut 22 Views 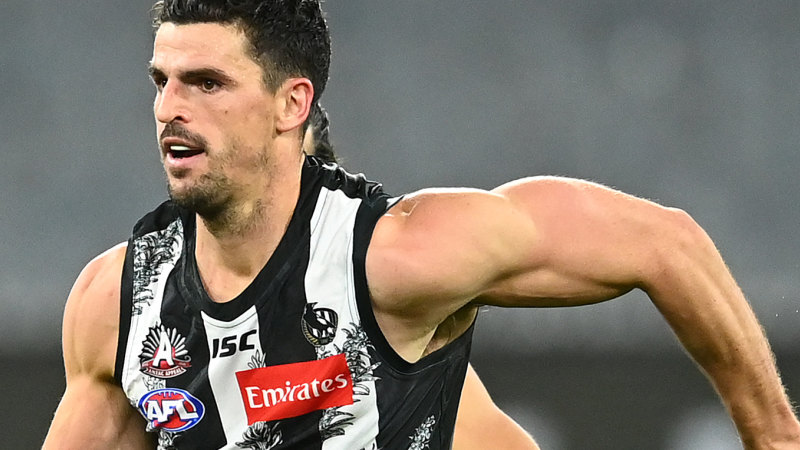 That’s all for tonight guys from me, Damien Ractliffe.

There were a couple of Hawthorn players who had big numbers but didn’t have as much impact as their opponents in black and white.

Also, shout out to Isaac Quaynor who looked very settled in defence. Expect he might sew down that spot and keep John Noble out of the team for a bit longer.

Clarkson says the season is still alive for Hawthorn at 3-3, having played five of the competition’s best sides in the first six matches.

The loss to Collingwood added to losses to GWS Giants and Geelong, but the Hawks have also beaten Brisbane and Richmond in the first third of the season.

“We are realistic about where we sit as a footy club,” he said.

“We’ve played five of the best six teams from last season and we’re 3-3. We’d like to be better than that but 3-3 is still alive in terms of the season.”

Clarkson said the Pies dominated around the football early and set the tone for the match. The 25-point lead at quarter-time remained about the same (32 points) by the final siren.

“We played a good side and they showed us up in that space, particularly early in the game,” he said.

“We over-possessed in the back half. When we turned it over, it gave Collingwood the corridor. Their domination of the game to half-time was significant.

Meanwhile, Clarkson said clubs will have to get used to soft-tissue injuries off short breaks. Jonathon Patton pinged his hamstring early in the match, while Clarkson referenced the two hamstring injuries to Geelong early on Thursday night.

Pies move into fourth on the ladder temporarily – six games, three wins, two losses and a draw, 14 points and a percentage of 146.

They boast the second best percentage behind Port Adelaide, having won big over the Western Bulldogs, St Kilda and Hawthorn this season. However, having drawn with Richmond, percentage might prove insignificant for Collingwood this year.

Their two losses came to GWS Giants and Essendon, both by narrow margins.

Hawthorn are 3-3 in 10th with a percentage of just 84.4 and they face a big challenge to make the top eight this year.

Port Adelaide, Geelong, Brisbane and Collingwood all look like top eight sides, as do Essendon and GWS Giants. Richmond and the Western Bulldogs are also finals contenders, while you suspect West Coast will improve back at home in Perth.

And that doesn’t give any credit to St Kilda or the Gold Coast, who are both currently inside the top eight.

Collingwood faces a critical two weeks, up against Geelong and West Coast, both in Perth.

Hawthorn takes on Melbourne next weekend.

The AFL is considering the viability of scheduling teams to back up for games after four-day breaks as Richmond coach Damien Hardwick called for the interchange bench to be extended to as many as eight players if the fixture is condensed during the 32-day period when Victorian teams are on the road.

The premiership coach’s call came as Geelong star Patrick Dangerfield, who is also president of the AFL Players Association, agreed it made sense to reduce the time between games while clubs are away until the first week of August.

“We got to work early and I think our work inside was the biggest improvement for us, led really well by Pendles, Tay, Treloar, Rupert Wills,” Buckley said.

“We were able to get forward often enough. If we were able to kick a bit straighter, I would have liked that through the second and third.

“It does start around the ball. We were able to get a lot of our offence started off good defence.

“We’re satisfied with our performance but we know there’s still a lot of improvement in us as well.”

On the prospect of playing in front of 30,000 against Geelong in Perth, Buckley said: “There is still six days between now and then so plenty can happen but if that is to be it would be a further fillip.

Meanwhile, on Will Kelly’s arm injury, Buckley said: “It’s a tough game. It is bittersweet.”

“He looked like he was enjoying himself and he was part of a solid team performance. It looks like a dislocated elbow,” he said.

“We plan to fly him over to Perth and get him whatever assistance he needs over there.”

If Collingwood are supposedly experts at attracting scandal off the field then it checks out they are good at responding to them on the field, writes Anthony Colangelo.

With Jordan De Goey facing indecent assault charges, Steele Sidebottom breaching COVID-19 restrictions and the Heritier Lumumba investigation ongoing (not to mention president Eddie McGuire’s penchant for speaking out), fans of the black and white were desperate for positive headlines.

Luckily for them the 22 players that ran out in those colours on Friday night released the pressure.

Pies sing the song with Will Kelly, arm in a sling, and Atu Bosenavulagi in the middle.

Atu Bosenavulagi was active in his debut match. He had 16 disposals, but just the one tackle as a small forward. That’s one focus for him going forward.

Will Day also had 16 disposals in his first match for Hawthorn.

Will Kelly finished the game injured for Collingwood after kicking a running goal with his first kick in senior footy. He had just five disposals.

Meanwhile, Isaac Quaynor in his first game in 2020, his fifth in senior footy, was really impressive off half back for Collingwood with 15 disposals and 431 metres gained.

Some of the match-ups I was keen to see:

Adam Treloar v Tom Mitchell: They ended up the two highest possession getters on the ground, but Treloar seemed to be a lot more damaging. It helps when you play in a winning team. Treloar had 35, Mitchell 33. As far as metres gained, Treloar had 526 metres gained to Mitchell’s 273. Treloar also won the clearances, 6-4, against Mitchell.

Mason Cox v Ben McEvoy: That match up didn’t really eventuate after Jonathon Patton’s hamstring injury. McEvoy was swung forward and kicked one goal but had limited supply. Cox was marginally better than in recent weeks, kicking one goal from two free kicks, but had just five disposals.

Leading possession-getter Adam Treloar says the Pies made a tweak to the way they moved the footy.

They struggled under pressure in the wet against Essendon last week, but were more direct with the football tonight. Treloar had 35 disposals.

“I think the conditions didn’t help last week but we overused it with our hands,” he said.

“It was definitely a focus this week, get the ball out through the front of the stoppage.”

Tom Mitchell had 33 disposals, while James Sicily (28) and Isaac Smith (26) also had plenty of the ball, but the Pies were a lot more damaging with their disposals.

Meanwhile, Will Kelly has his left arm in a sling. He kicked a goal with his first kick in AFL footy, the first goal for the match, but landed awkwardly late in the match.

‘No leg to stand on’: Buckley laments tennis match after Magpies loss