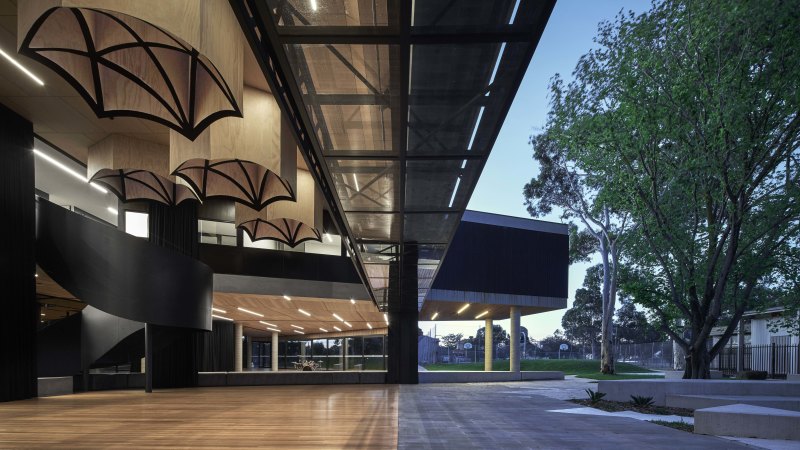 The orange brick structure formerly on this site was also riddled with structural issues, and was reaching the end of its lifespan.

Although this building was transformed to rubble, there were a number of strong architectural features that resonated with the architects of the practice, Brad Wray and co-director Nick Russo.

“Nick and I loved the dome above the altar as well as the layering of the exterior brickwork. There was also something quite charming about the three-dimensional relief work on the interior walls,” says Wray, who replaced the ’60s buildings with a brand new wing.

Constructed in concrete and glass, with massive steel girders, the new arts complex is orientated to a courtyard garden, designed by landscape architects Orchard Design in the footprint of the former complex.

As well as the many highlights in the former building, Branch Studio Architecture was initially inspired by the foyer in the Victorian College of the Arts’ performing arts centre at Southbank, designed by Peter Corrigan and Maggie Edmond.

“There was a performance by ballet dancers in the foyer, aligned on the vibrant blue floor,” says Wray, who recalls the image of these dancers as he traversed the wrap-around staircase and viewed this perspective from above.

The Arts Epicentre doesn’t come with a blue floor, but there is a circular arrangement to the way this performing arts space is used: a concrete staircase with a steel mesh curtain acting as a “veil” on one side, and a black steel curved staircase on the other side of the space.

“The idea is that you can circle the main performance space, with the silhouette of people going to the first floor, creating a theatrical backdrop,” says Wray, who also conceived the spiral staircase to include a balcony for the performers.

The outdoor area also becomes an important part of the stage, with one continuous automated glass and steel door bridging the indoors and outdoors.

Hence, the airport-style door that folds in on itself required substantial steel girders for support.

Pivotal to the design are five skylights that pierce the plywood ceiling, creating lightwells, as well as adding a sense of drama to the centre.

Set within the six-metre-high void, these steel-framed plywood-lined skylights are truly works of art in their own right.

Again, while not obvious for those who didn’t enter the former building, there’s the memory of the umbrella-shaped relief that once graced the walls.

Branch Studio Architecture also brought the memory of Corrigan and Edmond’s colourful interior on this journey, with the series of adjacent change rooms created in strident blocks of vibrant colour, including blue.

While the performing arts space has a theatrical feel, the individual music and art studios on the first floor are more restrained, but as equally considered.

A sense of joy is also beautifully expressed on the building’s exterior, in particular the west and south elevations.

The perforated laser-cut steel screens, supported by concrete bands on either side, took their cue from the pianola script of Singing in the Rain (a memorable dance scene featuring actor Gene Kelly).

“You wouldn’t necessarily pick up this detail, but the screens certainly diffuse the light and add to the theatricality of the centre,” adds Wray.