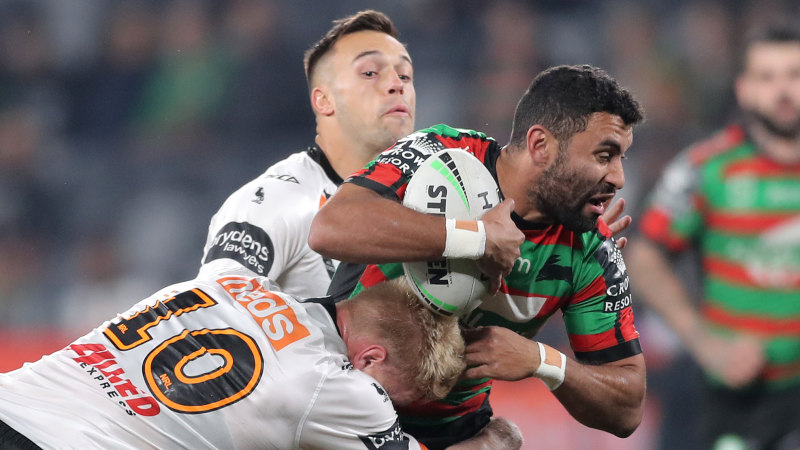 Keep it tuned to SMH Sport to see what both coaches have to say about the game and the incidents involving Josh Reynolds and Latrell Mitchell.

The final siren has rung out at Bankwest Stadium.

Souths have repelled a late Tigers surge to claim an 18-10 win.

Michael Maguire’s men finally started to throw the football around when trailing 18-0 with 25 to play.

If they played the first 60 minutes like they did the last 20, this result might have been different.

There’s only a few minutes left here and the Tigers still need to score twice.

A David Nofoaluma knock on as he soared high for a bomb sealed the Tigers’ fate.

Is this Storm vs Roosters all over again?

The Tigers are in again, this time through debutant Reece Hoffman.

Moses Mbye has hooked the conversion, though, giving Souths an 18-10 lead with 10 to play.

Josh Aloiai is in and the Tigers are on the board.

A brilliant play from Harry Grant out of dummy half put the prop in enough space to burrow over the line.

Can the Tigers do what the Storm did to the Roosters last Thursday?

If Latrell Mitchell wasn’t already in hot water with the NRL judiciary for a swinging arm on Josh Reynolds, he will be now after clocking Luke Garner high.

He’s been placed on report by Ben Cummins.

Dane Gagai has a hat trick and this game is all over.

The Tigers’ left edge defence has been abysmal, giving the Queensland Origin star three uninterrupted runs to the line.

It’s been four long weeks but the star Tigers playmaker has made his return from NRL exile.

Souths could be home and hosed here.

A sublime pass from Adam Reynolds put James Roberts away down the right wing and the man they call ‘The Jet’ could not be stopped in a 30 metre run to the line.

Rapid turn of foot there from the former NSW Origin centre.

We’re back in business here at Bankwest.

The bad news for Tigers fans is they’ve been dreadful in the first half.

Let’s see if they can peel back the margin.