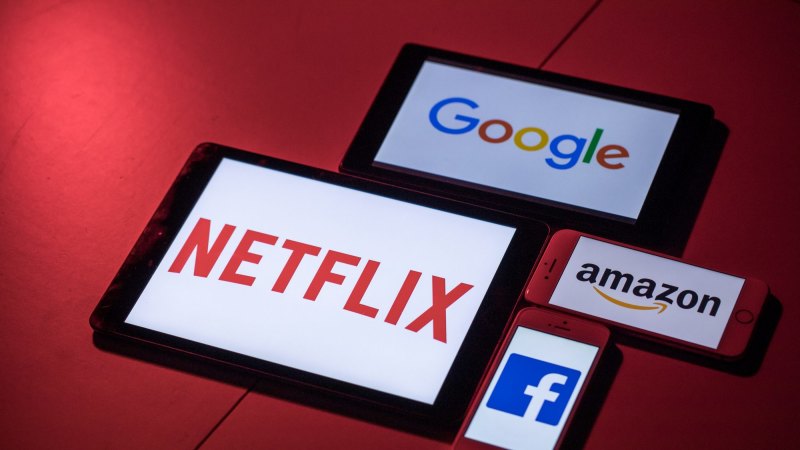 “Our investment philosophy is investing in where the world is going,” Mr Moore said.

“Double digit growth over an extended period of time is difficult to bank on,” he said. “There is a little bit of a feeling we might be going through a better than average patch for certain types of companies. I don’t think we can expect that to continue ad infinitum.”

Like the $180 billion behemoth AustralianSuper, its returns have been helped by an overweight allocation to international equities, buoyed by the tech sector’s domination of the US sharemarket.

The pandemic has been a boon for the technology sector as entire populations are confined to their homes, working and being entertained digitally. Major US tech players such as Amazon, Apple, Microsoft and Google were not immune from the COVID-19 rout but their recovery has easily outpaced the wider market.

According to Refinitiv, the tech-heavy Nasdaq added more than 43 per cent to its value since the start of April and continues to claim record heights. While not insignificant, the S&P 500 has only gained 27 per cent in comparison, and the Dow Jones Industrial Average 22 per cent.

The ASX 200 tech sector, while a comparative minnow, has too lapped the broader equities market. Local tech stocks have gained 57 per cent since the start of April against a 12.9 per cent gain for the wider bourse. The more notable examples include buy now, pay later darling Afterpay, which has increased its share price more than eight-fold from a year low of $8.01 back in March.

However, fears of another dotcom bubble are never too far from the surface, with asset consulting firm Jana advising super funds to reduce exposure to international equities in recent months, fearing the US market was showing signs of over-valuation.

“A lot of those companies are fantastic companies with very strong market positions, strong balance sheets, but their valuations are very high and there is a lot of high expectations for earnings growth priced into some of those companies,” Jana chief investment officer Steven Carew said.

“I don’t know if they’re due for a correction or not but they look priced for strong past earnings growth to continue and that’s always uncertain.

But the primacy of the technology companies is hard to deny and according to JP Morgan Asset Management’s global market strategist Kerry Craig it’s difficult to compare current tech investing trends to the dotcom bubble of the 1990s and 2000s.

“Back then it was a very exuberant market and at the moment you would not call this market exuberant. Investors are very clear on the risks.”

“It’s the stuff that people look at and say that is going to be the future of where things go, and for that reason these things are valued highly because they are a long-run, secular story with high growth potential. “

“And so they become almost defensive: Because they’ve got this long run growth view they kind of almost act like a bond to a certain extent,” Mr Craig added.

Wilson Asset Management chief investment officer David Cassidy agrees that the current market was vastly different to the turn of the century.

“The internet was more of a concept back then as to now it’s a reality and permeates everything we do on a day to day basis,” Mr Cassidy said. “These companies might be on elevated multiples but they are in a lot of cases real businesses with real revenue they are not just concept stocks.

“You can look at companies today in the tech space, and say the valuations are more plausible, especially in the US.”

Wilson Asset management specialises in mid-cap investing and was the broker that took market darling Afterpay public. Mr Cassidy explains that it is more important than ever to have an active management strategy when it comes to tech investing.

“Purely buying the index is fraught with issues,” he said. “If you’re just buying the index, you still might capture some winners but you could capture a lot of losers as well. That’s where active management comes in.”

Ross Barrows is Wilson’s senior analyst specialising in technology stocks and uses a checklist to evaluate a tech stock’s ability to succeed that measures everything from its governance structure to cashflow prospects. But perhaps the most importance is global competitiveness.

“Five or eight years ago, if you were competitive domestically you could do well. You still can in some ways still do well but I think the real success stories will be globally competitive,” he said.