Breaking News
Home / AFL / With no crowds and few goals, what is the point?

With no crowds and few goals, what is the point? 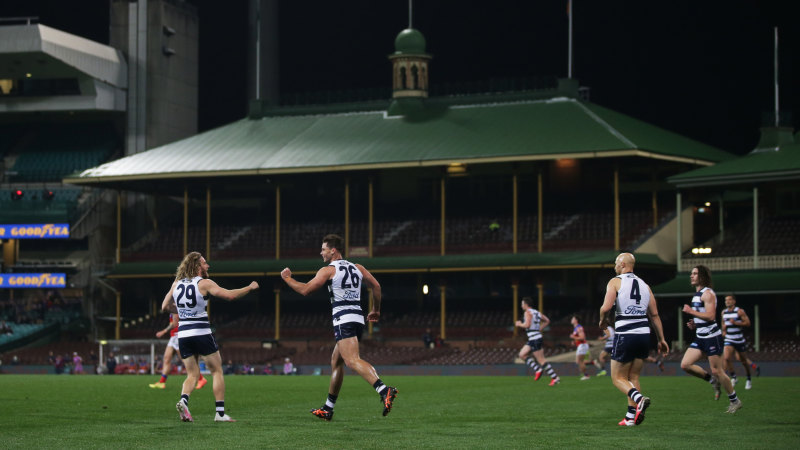 But it is hard to escape the feeling that this season is so beside the point. The AFL’s total evacuation of Victoria this week only sharpens it. The bi-product is a boost for the game in the northern states, but it’s momentary, an accident.

Without crowds, or with token crowds, it doesn’t strictly matter where the games are played. Most people watch footy on TV anyway, and on TV, it could be anywhere, and now is everywhere and nowhere. A ground is a ground, is two sets of goalposts and a boundary line – and Bruce.

But the sudden absence of footy in Melbourne, sensed rather than seen, does add to the general feeling of rootlessness.

Most of the peripheral elements that give the footy season its texture – training sessions, lunches, water cooler conversations – had disappeared anyway. Now there’s nothing. Footy becomes just one more thing we do from home.

And what of the footy? It’s T20 in 2020. The games are short, the scoring low, the style frantic. Defences prevail. Six-six-six is so last year. It is easier to hold on to a two-goal break for 16 minutes than 20, so hold on they do.

It can’t be helped, but it must be said. It is unlikely to change. The injury rate is high. Squad players, not able to play any other meaningful footy while waiting, come in cold.

Now there’s talk cramming in games while we can. It’s to run a sport while outrunning a pandemic. Again, this is as it must be, but it will do nothing for quality.

Players are in hubs, fans are in limbo, footy is in quarantine. Everyone is taking it one week at a time, because that’s pretty much all there is. Footballers are slaves to and products of routine, but now there is none. And there’s no narrative, at least not yet. The only narrative is the absence of narrative. That’s too post-modern for most.

Empty stadiums make for a hollow experience. Perversely, this has less effect on fans than players, who don’t get the sound effects. Tom Hawkins sounded almost wistful on Thursday night when he said how good it was to hear the voices of the few hundred who were allowed into the SCG. Vacancy has taken something away from the spectacle, and it’s impossible not to think that it’s taken something away from the game.

TV footy ratings remain strong, but let’s face it: what else are you going to do just now?

We don’t know how it will all end, which is normal. We don’t know when and where it will all end, which is not. In this state, we’re locked down again nearly until September, and there’ll still be half a season to play. By then, the footy year will feel really out of whack. It would take only a small hiccup from the pandemic to throw it off course altogether. We in Victoria know that better than anyone.

When footy was shut down, a surprising number of people said they weren’t missing it as much as they thought. When its return was imminent, suddenly they did miss it. But perhaps they were missing what it was, not what it is now.

There will be a premier, eventually. It won’t necessarily be the best-equipped team, but the one that adapts best to this footballing nether-world. Like water, Heath Shaw said this week, finding the shortest course. Some things don’t change. Shaw is one, blessedly.

So when wondering about whether it is worth it to ad lib our way through this syncopated season, the cliche of the age rings true: it is what it is. My confidantes who scratch their head about the whole project have a valid point of view, but they had good careers and are living rewarding other lives and so can take or leave.

For the rest of us, given a choice between this footy and no footy, we’ll take this footy every time.

Previous COVID test No.16 just part of life in an AFL hub
Next Lockdown could be messing with your body clock