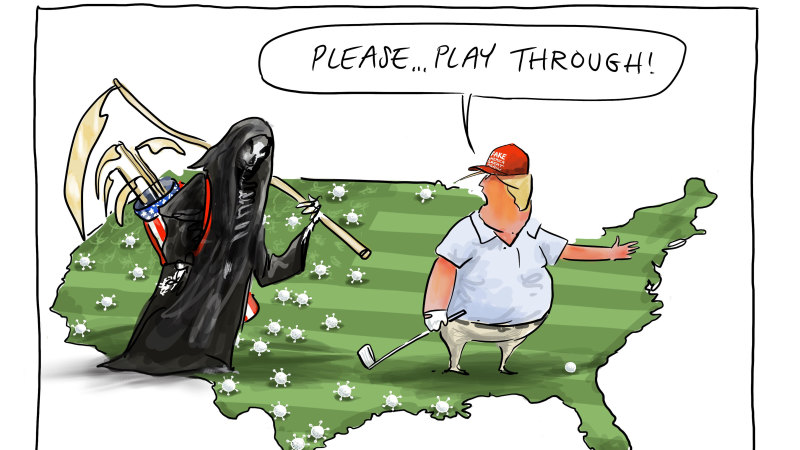 As we descended into the valley we saw a very large black panther ascending the hummocky paddock to our right (‘‘Tails of mystery as the hunt goes on’’, The Sunday Age, 5/7). We stopped and all 20 students and I got off the bus and ran towards the panther. I tried to get a better look through my camera but was so excited I failed to take a picture.

The panther was at least eight feet long with a large tail which it used as a ‘‘rudder’’ as it raced away up the escarpment.

I lived in Africa as a volunteer for nearly five years and did a good deal of game spotting. There is no doubt about what we all saw.

The farmer said they often found sheep carcasses which showed signs of particularly savage attack and everyone locally knew that it was a panther.

I do so wish I had pushed that camera button.
Bill Cleveland, Kew

Time-honoured practice
Ah, dear Jessica, we (mostly female) oldies were doing things similar to that which you espouse in your Money column (‘‘A guide to staying on track’’, The Sunday Age, 5/7).

Only we used that old-fashioned stuff called paper notes and coins stuffed into jars labelled ‘‘phone’’, ‘‘gas’’, electricity’’, ‘‘rent’’, etc. This was collected monthly or quarterly and handed over to the post office, bank or rental office. Worked well then, just different eras.
Bet May, Berwick

The problem of …
In the letter to The Sunday Age (‘‘Don’t deny the past’’, 5/7) your correspondent says that removing statues of tyrants and slave owners somehow changes the history of the nation.

In Germany there are many historical memorials and markers to remember the Holocaust but statues to commemorate Adolf Hitler or Heinrich Himmler would be unthinkable.
In Melbourne we’ve renamed streets to celebrate talented musicians including AC/DC and Roland S. Howard. Has history been re-written in the process? The history remains the same as we honour these people.

Times have changed as we realise that our Indigenous population deserves respect and should be included in discussions about who is honoured with statues and plaques. Time for Indigenous representation of statues and plaques to replace some of the white men, tyrants and slave owners. Archie Roach anyone?
Paul Elliott, Clifton Hill

… addressing the past
Your correspondent says we should embrace our history, not rewrite it.

While I agree with the first part of this statement, in order to do so we need our history to be accurately written so that we can move on from the myths, fairytales and straight-out mistruths that currently pass as our historical record.
Graeme Gardner, Reservoir

Picking your battles
Warwick McFadyen is spot on about warmongering (‘‘Do we want freedom bought this way?’’, Opinion, The Sunday Age, 5/7).

In spite of Scott Morrison’s Churchillian rhetoric, there is no way Australia has, or will have, the military capacity to make even the tiniest impression on a superpower armed to the teeth with weapons and plenty of manpower.

Scott Morrison must recognise he cannot fight a war on two fronts, and, surely, the daily battles against the deadly coronavirus should be his most immediate concern.
Helen Scheller, Benalla

It’s not either/or
Philosophers and psychologists tell us that humans seek to make sense of, find a meaning to, their existence. Religious faith and secular science have evolved as two different ways of doing such.

Faith has been around for eons. Science, as we know it, has only been here for a few hundred years or so. Barney Zwartz in Faith (The Sunday Age, 5/7) begins his discussion about faith and science saying ‘‘atheists like to define faith as ‘belief without evidence’, or the opposite of knowledge’’ because ‘‘whoever wins the definition wins the debate’’.

I suggest that therein lies the real problem. It’s not so much there are differing ways of looking at reality, of making sense of the human condition. Rather it’s that it’s put in the terms of views being right or wrong, of winning or losing. Maybe if we looked at religion and science as being different sides of the same coin we could get a win-win outcome.

Make masks compulsory
Urging Victorians to wear masks may not be enough. For many years high-density developments have been built close to public transport corridors. Young people and workers are heavy users of public transport.

Maybe it is time to make masks compulsory on public transport. Conductors could even distribute them.
Andrew Gemmell, Glenroy

To submit a letter to The Age, email letters@theage.com.au. Please include your home address and telephone number.

Previous Bill Gates calls for COVID-19 meds to go to people who need them, not ‘highest bidder’
Next Thompson wants to join best of British after hard-hitting Dogs debut