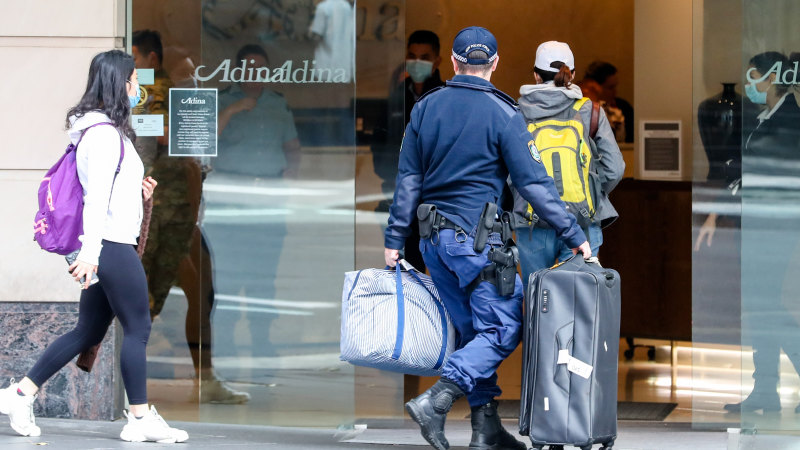 On Friday, Ms Berejiklian indicated that NSW would charge overseas visitors for hotel quarantine rather than NSW residents, but the new charges announced on Sunday apply to all travellers.

From Saturday, travellers will be charged $3,000 for one adult, $1000 for each additional adult and $500 per child aged three and over. Children under three-years-old will stay free of charge.

The new charges mean a family of two parents and two children aged over three will pay $5000 for their 14-day stay in a designated quarantine hotel.

Other state and territories are expected to introduce similar charges, and Queensland already charges returning travellers.

Sydney’s quarantine hotels have taken the bulk of Australia’s returned travellers since Victorian Premier Denial Andrews called for all international flights to be diverted from Melbourne amid the city’s worsening coronavirus resurgence.

The NSW minister responsible for hotel quarantine Stuart Ayres said contending with the large numbers of returning travellers to Australia “posed a major logistical challenge, however it’s one that has been successfully managed”.

The new charges include accommodation and meals. The state government will still foot the bill for security, transport and logistics.

At the end of their quarantine period travellers will be given an invoice to pay within 30 days. Hardship arrangements will be available for families that will struggle to find the money.

More than 35,000 Australian citizens and permanent residents returning from overseas processes through our hotel quarantine system since 29 March. About two-thirds were NSW residents and the rest were residents of other state and territories in transit.

“NSW Police, NSW Health officials and the accommodation industry will continue to
work together to provide the nation’s leading hotel quarantine system,” he said.

On Friday Prime Minister Scott Morrison announced the number of international arrivals would be cut by more than half, resulting in 4000 fewer arrivals per week and a nationwide review of hotel quarantine.

Australians living overseas have been rattled by the move. Matthew Spence, who worked in the aviation industry in Kuala Lumpur, Malaysia, until he was made redundant on June 30, said flights to Sydney were sparse and he was booked on the first available flight on July 18.

“I am concerned the intake cut will result in flight cancellations, further adding to the stress of Aussies trying to return,” Mr Spence said. “If you are an Australian citizen you have the expectation that you can always return home when you need to.”

Mr Spence said he didn’t have a problem with paying the costs of hotel quarantine, but “we should not be blaming people for not returning earlier without understanding their predicament”.

Andrew Taylor is a Senior Reporter for The Sydney Morning Herald.

Previous Bins overflow at The Alfred with ward access cut after positive tests
Next ‘When I did what I did, I kind of blank out’: Leilua opens up on brain snap against Panthers

“The northern NSW region is a huge recipient of all those displaced travellers,” Mr Jones …