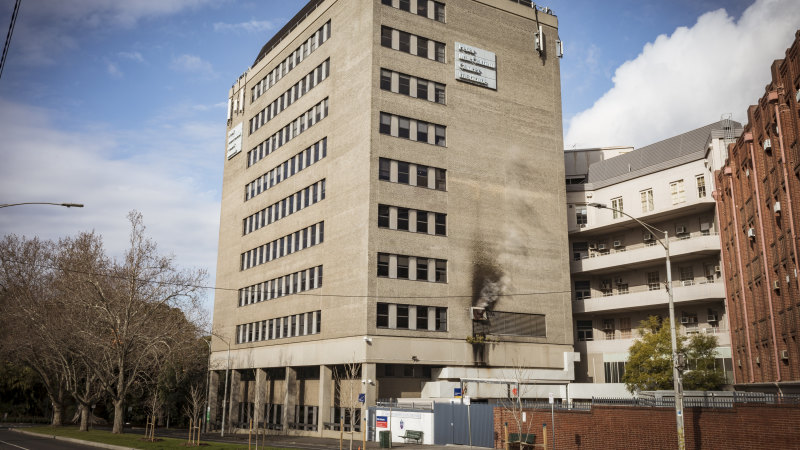 “While we are starting to see an increase in hospital presentations, Victorians can be assured our health system is ready and able to meet additional demand if necessary,” the statement said.

The fact the recommissioned hospital wards remain unused almost eight weeks after being built has raised questions about the priorities of a government plan to expand the state’s intensive care unit capacity, announced in the early stages of the pandemic.

Dr Stephen Warrillow, who sits on the board of the Australian and New Zealand Intensive Care Society, said the predicted surge of critically ill coronavirus patients should be admitted into well-established intensive care units at hospitals, ahead of “novel solutions”.

“From the collective viewpoint of the Victorian intensive care community, it is sensible to maximise utilisation of existing facilities before we have to spill over to greenfield sites,” he said.

When asked about several health projects commissioned by the government to expand the state’s capacity to fight the pandemic that have been cancelled, are over-budget or are not ready to deal with the surge in infections, Dr Warrillow said it was “easy to be critical in hindsight”.

“At the time when difficult decisions were being made there was the very serious possibility that we were going to face the biggest healthcare crisis of our history and see literally thousands of people critically ill and at high risk of dying,” he said. “It was absolutely appropriate to seek whatever solutions might be available at the time.”

As the number of people in hospital with COVID-19 in Victoria more than tripled in a week to almost 50, Dr Warrillow said the threat of coronavirus continued to be “very real” and more deaths were inevitable.

In 2017 the Andrews government had proposed selling the East Melbourne site that was occupied by the Peter MacCallum Cancer Centre until 2016.

With an expected value above $100 million, the prime site overlooking Fitzroy Gardens was deemed surplus to public needs by the Victorian Treasury.

This masthead revealed last week that several major orders for ventilators, defibrillators and intensive care monitors – often based on the worst-case scenario – had been cancelled or renegotiated, at significant expense to taxpayers.

More than 3000 intensive care monitors were ordered in April before the consignment was significantly reduced after protracted negotiations with the manufacturer.

Health Purchasing Victoria had wanted fewer than 1000 of the monitors, but eventually agreed to take about 2000.

And plans to buy hundreds of defibrillators from overseas did not proceed after Victoria managed to flatten the curve in April.

A proposal for a 750-bed intensive care unit at Melbourne Convention and Exhibition Centre was shelved in May, after construction group Lendlease was engaged to build the makeshift facility.

It is unknown if a commercial agreement was made with Lendlease, or whether it received compensation when the project was cancelled.

Previous Get the egg nog, Christmas has come early – in Pascoe Vale, at least
Next Cyber experts urge Australia to develop local capability to defend against hackers