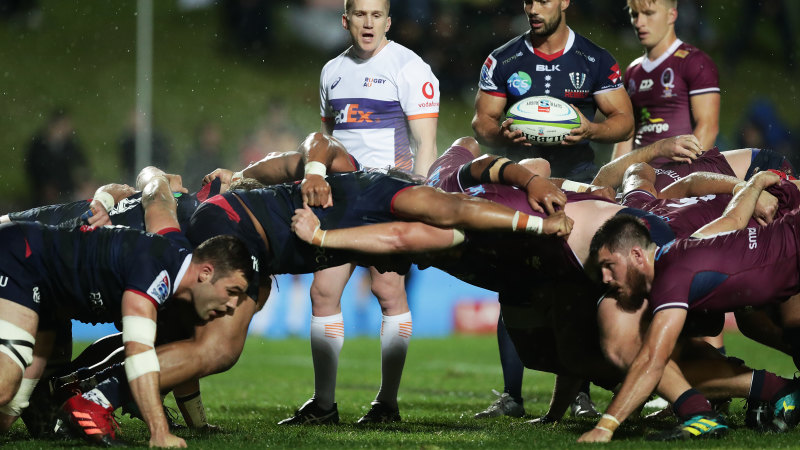 “Scrum without a boot. It really bugs me. You watch rugby league, and I know it’s not as technical and the front rows are different, but if you’re forced to pack the scrum and you can’t make it in time and a free kick is given against you, I guaranteed you’ll make the scrum.”

Toomua said ‘cuffo’ – referring to a sore rotator cuff joint in the shoulder – and ‘diesel’ were also used a lot and had to go for the sake of fans.

“It’s usually a ‘diesel’ call to your big boys, a fly-half will go up to a prop and give the call and he’ll fall over and say he’s injured,” he revealed.

“Or a ‘cuffo’, you complain that your rotator cuff is sore and a touchie comes in and tests your shoulder and you get some ice on it.

“I’ve done it many times, I’ve played for the Brumbies and Leicester Tigers, it’s a big part of our tactical approach in both teams. When we played two nights ago we were waiting for a second rower to ties his shoelaces. That part of the game needs a lot of work.”

Toomua stressed he did not want to compromise player safety, but allow fatigue to take its toll so games open up at the back end.

“Like you see in rugby league, a lot of guys out on their feet. You can manage stoppages in play too easily at the moment [in rugby],” he said.

“I don’t want scrums to be set super quick and impact safety, guys need to have their footing. But there’ll be a lot less people faking injury if they’re forced to pack a seven-man scrum and get turned over.

Toomua raised the issue in a note he sent to his fellow law variation group members not long after Friday’s anti-climactic draw between the Rebels and Reds at Brookvale Oval.

Tied at 18-18 after a dour 80 minutes, the game was enlivened by the first use of ‘Super time’ since the competition started. But fans’ intrigue soon turned to disenchantment after two consecutive five-minute periods failed to elicit a score, as kickers from both sides booted it back and forth. Reds fullback Bryce Hegarty missed a long-range penalty goal.

Toomua said penalty goals should be eradicated and Super time won by the first team to score a try.

“It was a case of no one wanting to lose,” Toomua said, conceding the Rebels’ weaker scrum made them extra conservative.

“Because it was too wet for us, if we knocked the ball on they’d get a scrum and probably get a penalty, so we wanted to pressure them with our kicking game.

“If a draw is like kissing your sister, then a draw after extra time is like giving her a French kiss. It’s much worse.”

Rugby Australia is unlikely to review the law variations after just one instance of Super time, as they would need to clear any further revisions with World Rugby. A review would take place after the competition finishes, a spokesman said.

Previous ‘They should help’: Sydney cladding crisis leaves big bills for owners
Next Israel learning a lesson in hubris as COVID cases soar

Straight from the centre bounce, some classy play from Parish and Stringer leads to a …