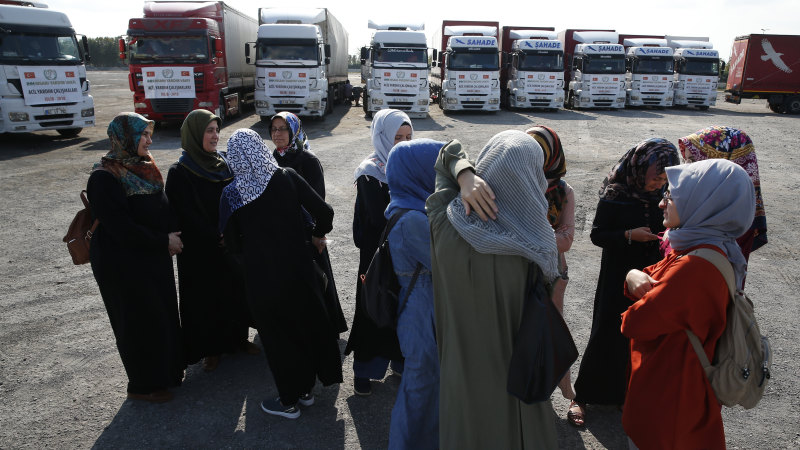 Given the divergent positions, the “council had no choice but to make yet another decision that is not reflecting the humanitarian needs on the ground in order to find compromise,” Germany’s UN ambassador, Cristoph Heusgen, said.

“Today is yet another sad day,” he said. “The council had to make a decision to compromise” to allow at least one of the crossings to continue funneling aid to nearly 3 million civilians in Idlib province.

“Let’s not be mistaken,” US Ambassador Kelly Craft said. “This is not what the United States and the majority fought for.”

Accusing the resolution’s sponsors of “clumsiness” in handling the closed-door debate, Polyanskiy said that the “hypocrisy and double standards of our Western colleagues attained unprecedented heights during this process”.

“The discussion today is not about humanitarian deliveries to Syria,” he said. “Our discussion is about politics, and I want to make it absolutely clear.”

Russia, along with Iran, is the primary backer of Syrian President Bashar Assad. Western nations blame them, and the scorched-earth campaign they have conducted against Syrian opposition forces for the past nine years, for the humanitarian crisis.

Assad, along with Moscow and Tehran, have long charged that the opposition is largely terrorist forces, and that the West’s only goal is to drive Assad from power.

The UN-coordinated international assistance program was begun in 2014 to aid millions of Syrians in opposition-held areas and those driven from their homes by the fighting. As Assad’s forces, aided by Russian air bombardment and Iranian-backed militia ground forces, have regained most of the country’s population areas, internal refugees have been driven into Syria’s northwest corner.

China, which often sides with Russia on the council, maintained that its primary interest in the issue was its opposition in principle to “unilateral coercive sanctions” of the sort imposed against the Assad government. The Dominican Republic also abstained in the final vote, explaining that it was strongly in favour of continuing the aid, but objected to the “politicisation” of the debate.

In response to the Russian and Chinese remarks, Heusgen said that he understood “that we all act on instructions” from governments. “But when you report home . . . just tell them that the German ambassador asks those people who gave the instructions, cut off the aid of 500,000 children, if they are ready to look into the mirror tomorrow?”