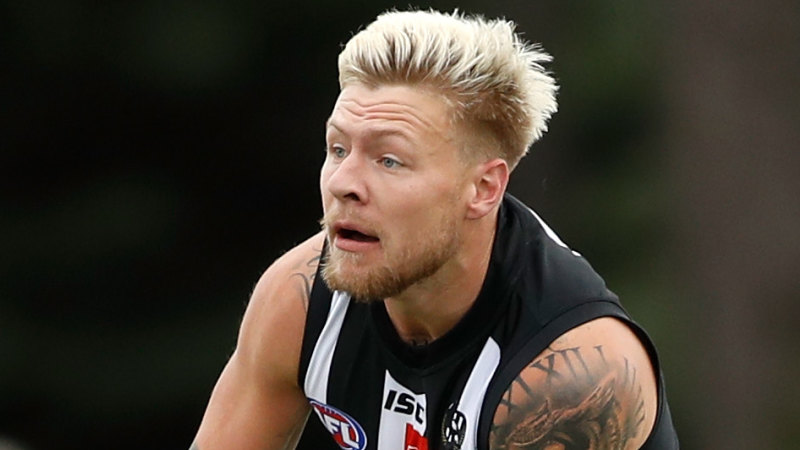 “Yeah he is a whipping boy, there’s a massive expectation of what he will bring to the table

“We have played a lot of night games; he has played in inclement conditions in the last couple of weeks.

“The role that he plays does straighten us up, it does give us an aerial target towards our goal and I think his competitiveness has been OK.

“But clearly he and we would like to see more from him and he has a greater capacity than what we’ve seen the last couple of weeks.”

Darcy Cameron would be the obvious replacement for Cox or Buckley may opt for a smaller attack, with star forward Jordan De Goey again available for selection.

De Goey missed the win over Hawthorn after police charged him with indecent assault. He flew directly to the WA hub.

“He trained today and he’s fit, so he’s available for selection,” Buckley said.

“Physically he’s in great shape, mentally and emotionally he seems good. To be back in and amongst the group has been good for he and Steele [Sidebottom] and Ben Reid, who were here earlier.

“He’s in a good headspace.”

In what has been a turbulent few weeks for the Pies, Sidebottom addressed his teammates on Monday and recorded a video for club members where he apologised for an incident where he broke COVID protocols and was driven home by police.

Western Bulldogs midfielder Lachie Hunter gave up the vice-captaincy earlier this year for an alleged drink-driving incident where he crashed into several cars.

But Buckley said the idea of Sidebottom relinquishing his leadership position was never discussed.

“It was all external commentary, not a consideration internally at any point,” he said.

“Once we were aware of the details of his indiscretion, the AFL were really strong with that penalty of the COVID breaches.

“Getting face to face with Steele was important for us and it was the first chance we had to get anyone in the same room.

“His leadership position is not diminished other than his most recent form has been not to his own liking or to ours.

“He’s got some work to do on that and we fully believe he’s got the capacity to do so.”

Josh Daicos is available for selection after missing a week with an ankle strain, while Brayden Sier is also putting his hand up after impressing in scratch matches.

Meanwhile Geelong believe the best way to curb the enormous influence of damaging Collingwood backman Darcy Moore is to challenge him to defend by getting into dangerous positions inside 50.

However Cats coach Chris Scott knows that will be easier said than done.

Scott praised the abilities of Moore, who has been outstanding in defence in 2020, but said with key forwards such as Tom Hawkins and Esava Ratugeloa the Cats hoped to keep him busy.

“It is rare to have a guy who is so good in the air that he is almost their designated user in the back half.

“Part of the plan has to be with those guys is challenging them the other way. If you’re completely defensive on them it just removes the requirement for them to need to defend themselves.

“We have a couple of guys in our forward half who can at least ask him some questions. We certainly won’t go in saying if we just stop him we have done the job. We have got to make him question what he is doing defensively.”

Scott said Moore was just one of about 10 Collingwood players who regularly determine the outcome of games however he was becoming one of their most crucial.

Scott also acknowledged it was important Geelong did not allow Collingwood to get off to a good start. The Magpies have kicked 24 of their 54 goals this season in the first quarter.

Previous Do Not Visit Victoria campaign a social media hit – now for the merch
Next ‘Diplomatic deficit’: Calls for more money to be spent on DFAT