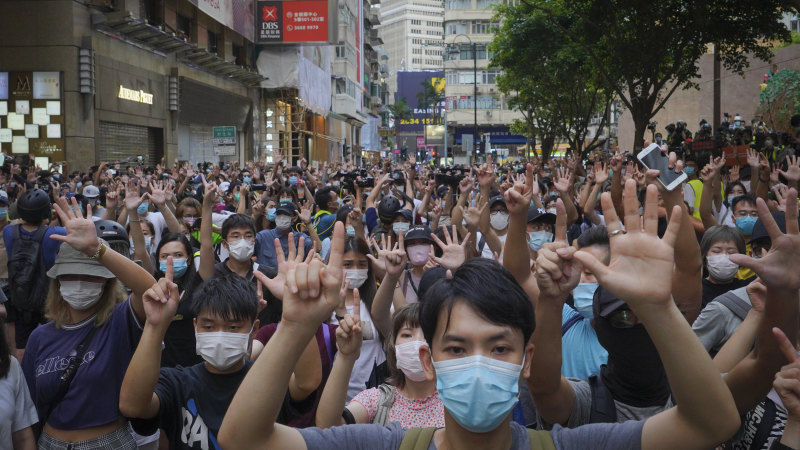 The Greens and the crossbench are considering whether to launch a Senate inquiry into the deal amid concerns it amounts to an implicit approval of Beijing’s new Hong Kong national security laws, which criminalise actions that undermine the Chinese state with sentences of up to life in prison.

The chairman of the Australia China Business Council David Olsson said on Wednesday that “a forced diversion of trade away” from China will always come at a cost to business and, by extension, the community.

“We need to deal with the world as it is,” he said. “In the near to medium term, it is difficult to envisage how any other market can offer the same breadth and depth of opportunity to Australian exporters as China.”

The US measures follow weeks of rising diplomatic tension over the political and commercial future of the semi-autonomous region.

Facebook, Zoom, Microsoft and Google have said they will ignore data requests under the new laws and The New York Times on Wednesday announced it would relocate its Hong Kong-based digital news operation to Seoul. Hong Kong-focused financial firms HSBC and Swire Group signed on before the laws were legislated after 15 months of protests over Beijing’s rising influence rocked the city.

The big four banks, Macquarie Group, the University of Wollongong, RMIT and hundreds of small businesses run by up to 100,000 Australian migrants all have a presence in the city and are set to be exposed to the economic impact of US capital moving out of the historic bridge between the East and the West.

The details of the US executive order, released for the first time on Wednesday afternoon, also show Fulbright education scholarships will terminated, license exceptions for exports to Hong Kong will be revoked, and Hong Kong police and those involved in cracking down on protesters will not be able to enter the United States.

Beijing has been battling to contain the economic fallout of its assertive diplomacy on several fronts after the UK on Wednesday formally announced it would block Chinese telecommunications giant Huawei from participating in its 5G network and ordered all existing components removed by 2027 over national security concerns.

Australia banned the Shenzhen company in 2018 and the US has been aggressively lobbying other countries to follow suit.

“How else would we put it? Our company’s been caught up in geopolitical nonsense,” he said. “[Huawei founder] Ren [Zhengfei] said a year and a half ago that we’re like a little sesame seed caught between two dinosaurs here.”

Previous AFL teams and expert tips, round seven
Next Safety first for Swans as Victorian clubs move north to Queensland