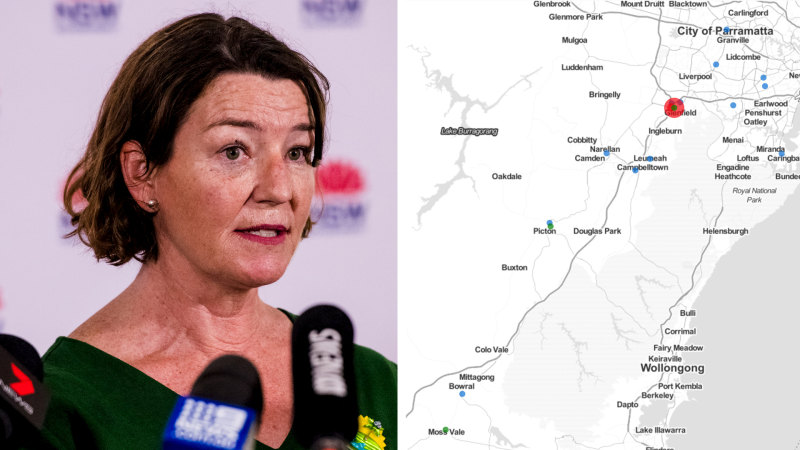 A hand-drawn mud map may sound low-tech, but Ms Musto said it’s faster to plot it all on a whiteboard than on a computer. Large street maps are also helpful, she said.

“You could actually just visualise the spread of the virus,” she said. “Mapping just helps me see what’s going on.”

Ms Musto should know what works best, as the COVID-19 pandemic is far from her first outbreak, and while Health Minister Brad Hazzard regularly likens the fight against the coronavirus to a war zone, he said she has actually been there.

“She really knows what it’s like to be facing down a war zone and be dealing with outbreaks of the most horrible infectious diseases,” Mr Hazzard said.

“To have a war zone detective leading such a fantastic group of people, I think it’s just wonderful for the people of NSW.”

Before rejoining NSW Health earlier this year, Ms Musto had spent seven years working with the World Health Organisation in countries including Bangladesh and Yemen. In Yemen, she was an incident manager working in surveillance and response during an outbreak of cholera and diphtheria, and also helped health services cope during periods of conflict.

She has also worked across the Pacific in countries including Fiji, the Solomon Islands, Papua New Guinea and Vanuatu.

“Last year we had the measles outbreak in Samoa that had a terrible outcome for many people, we have cholera, dengue fever, there’s a whole range of things that she has been involved in,” Mr Hazzard said.

Two weeks into her new job at Health Protection NSW she was diverted into the public health emergency operations centre.

But Ms Musto highlights the work of her team of more than 30, who since February have investigated 100 clusters. The Crossroads Hotel outbreak with 34 cases so far has been their biggest effort.

“You need people sitting there, interrogating all of those interviews and all of that information to make those links,” she said.

The operations team, made up of doctors, nurses and non-medical staff, work closely with the contact tracing team to piece together where exactly those people have been so the public can be alerted to get tested if they have been in those locations.

“What we do routinely is look back in time by 14 days to try and work out how these people were exposed, how they got infected,” she said.

Ms Musto said the initial call out for people who had been to the Crossroads on July 3 to get tested helped uncover several cases. But as the outbreak grows and includes more businesses, so too does their workload.

One of the Crossroads cases had also attended the Planet Fitness Gym in Casula, she said, and tracing every person who had been there while the man was infectious was “a pretty big job”.

“We usually send out an initial SMS, and then we call everybody, and then we probably put them on an app for SMS daily follow up,” she said. “So it’s a lot of work.”

So far more than 5000 people connected to the cluster have been contacted that way. But the work has helped uncover other cases, including two men aged in their 20s who had been to the Casula gym and came forward for testing.

“We’ve identified all links at this point in time, but we’ll get new cases,” she said. “And we’ll have to identify further links with them and further contacts and get them all to go into isolation as well.”

Previous We’re walking through this together: please don’t take that away
Next Blackrock warns US-China tensions primed to get worse