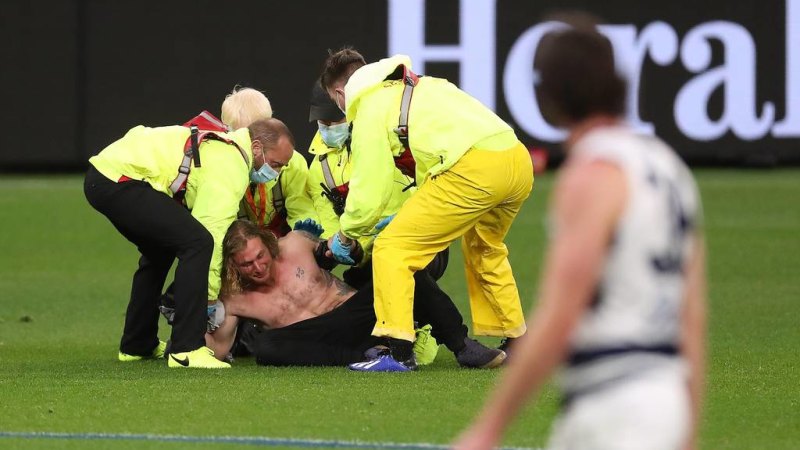 The Cats lost their captain Joel Selwood, young WA star Jordan Clark and their first AFL fixture while based in Perth but they still weren’t the biggest losers on the night football returned west.

The accolade belonged to a bare-chested, dishevelled pitch invader, who jumped the Optus Stadium fence in the dying minutes of Geelong’s historic clash with Collingwood in front of 22,077 fans on Thursday night.

Fines for entering the venue’s field of play were increased to $50,000 or possible jail as part of stricter quarantine measures for the AFL to resume fixtures in WA.

The pitch invader ran barely 10 metres on to the ground before security staff in masks and gloves swiftly brought him down.

They dragged the man from the field while he tried in vain to remove his pants.

His misdemeanour would likely land him in quarantine for 14 days and was the only downer to an otherwise entertaining and positive resumption of AFL action at Optus Stadium in 2020, with at least seven more weeks of consecutive football to come as the league looks to fast-track the trouble season.