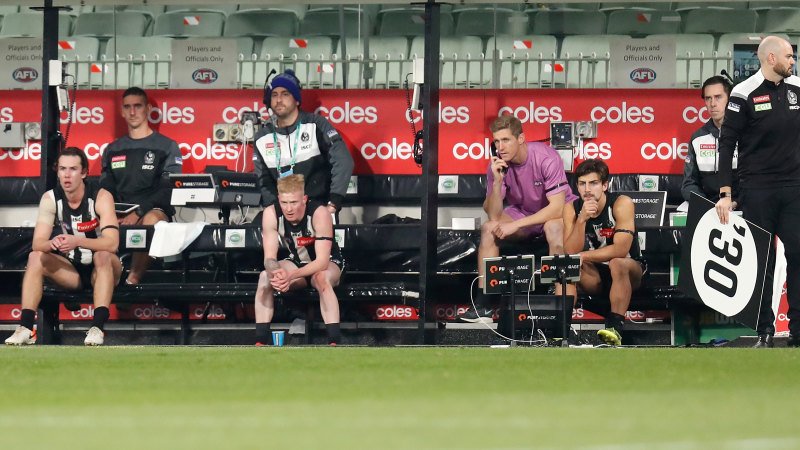 “I’m not sure it would help that much,” Brukner said.

“They would just rotate people more, the intensity would be higher and it cancels itself out.”

On Thursday the AFL remained unlikely to extend the bench considering the shorter games and the capacity for clubs to use their whole list enough of a safeguard despite Richmond coach Damien Hardwick suggesting he would like to see it increased to six or eight and Western Bulldogs coach Luke Beveridge reportedly calling for an injury sub.

Geelong, who lost Mitch Duncan and Quinton Narkle to hamstring injuries early in last Thursday night’s game, said they did not think the five-day break had been a factor in the pair breaking down.

However the prospect of injury is a real concern for players who are arguing for the contract freeze to be lifted to give players more certainty beyond 2020 with players aware that an injury suffered during the compressed part of the season could decrease their negotiating power with clubs.

The AFL is well aware of the complexity involved in scheduling games with short breaks as they do not want teams with significantly different breaks opposed to each other and are keen to limit travel when clubs are playing games in quick succession.

Essendon and Richmond will fly their injured stars to the Queensland quarantine hub on Friday to ensure they are free to join the team soon after the league kicks off a run of more than 30 games over 19 consecutive days once round eight is completed.

The AFL was also considering how to ensure the advantage Western Australian and Queensland clubs will enjoy with games being played in their home states for the foreseeable future was not too pronounced keeping open the prospect of the clubs from those two states being on the road at some point later in the season.

Brisbane Lions’ midfielder Jarrod Berry was quick however to nip in the bud any debate about fairness in 2020 responding rhetorically when questioned about the Lions’ potential advantage.

“Do you want football to keep going or do you want to just have nothing on TV?”

The AFL’s decision to race through games – with more than 30 matches likely to be played in 19 consecutive days – has seen Richmond and Essendon decide to fly their injured stars into Queensland’s quarantine hub on Friday.

Bomber pair Jake Stringer and Patrick Ambrose will get on the flight with other squad members Harrison Jones, Lachlan Johnson and Tom Hird after Essendon decided to include their young players in the hub while the Tigers will only fly up Dion Prestia and Toby Nankervis, who, like Stringer, are battling syndesmosis injuries.

Premiership pair Bachar Houli and Shane Edwards will remain with family in Melbourne along with half a dozen young Tigers including Luke English and Fraser Turner.

Melbourne will also reunite their entire squad with nine players who initially stayed in Melbourne such as the Wagner brothers, Josh and Corey, Kyle Dunkley and Kade Chandler, expected on the flight to the quarantine hub in Southport tomorrow.

The Demons, who have been in Sydney, will move to the Gold Coast on Monday after their game against Hawthorn.

Any AFL player arriving in Queensland from Victoria needing to do two weeks quarantine after catching AFL scheduled flights with one on Friday and another flight expected next week with the families of players from several clubs also expected to be on the flight in order to join their partners in a fortnight.

The double-header on Wednesday, exclusively broadcast on Fox Footy, had 176,000 for the twilight clash …