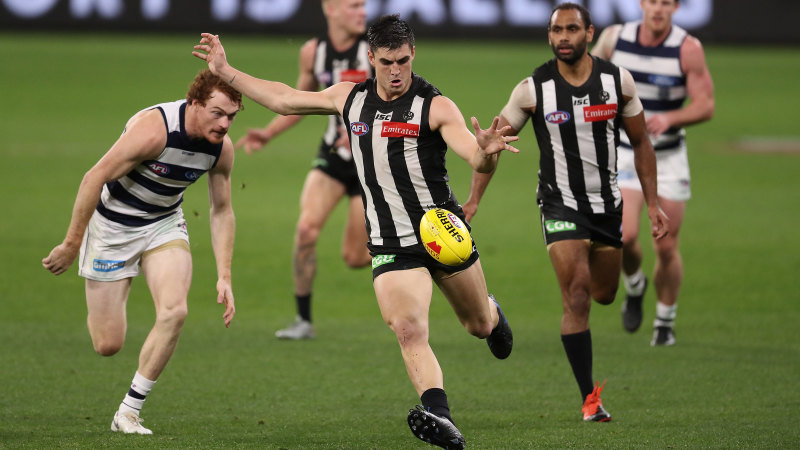 Queensland Premier Annastacia Palaszczuk this week told the AFL of her state’s desire to host this year’s grand final after her government’s assistance in allowing the 10 Victorian clubs to base themselves in the state.

The bizarre match-up between foundation clubs Geelong and Collingwood in Perth on Thursday night, which marked the return of bigger crowds to games, trumped the rematch of last year’s NRL grand final between the Sydney Roosters and Canberra Raiders.

The Cats-Magpies clash drew a metro audience of 694,000, nearly double the 350,000 who watched the Raiders reverse the grand final result.

In what could prove a sign of things to come, AFL fans are flocking to Thursday night football with ratings up 13 per cent to an average of 1.15 million national viewers.

This could be due to an increased appetite for live sport as a result of the coronavirus pandemic, while another factor could be Melbourne’s return to lockdown.

There has been negligible change to the NRL’s Thursday night numbers, with their national viewership of 832,427 down 0.9 per cent on its 2019 home-and-away average.

“I want to acknowledge the continued challenges facing so many Australians, in football and in the broader community,” the AFL’s clubs and broadcasting boss Travis Auld said.

“Despite yet another unique week in our game, the support and the interest from fans in the broadcast of AFL games continues to be extremely strong this year.”

Previous A hot, sweaty night reminds me why I heart NY
Next Sydney FC on cusp of historic premiership after dramatic win over Phoenix

Knocked out, sit out: AFL to enforce mandatory break after concussion