Hey, Josh Frydenberg, this is the season for fiscal rejoicing

admin 3 weeks ago Federal Politics Comments Off on Hey, Josh Frydenberg, this is the season for fiscal rejoicing 15 Views 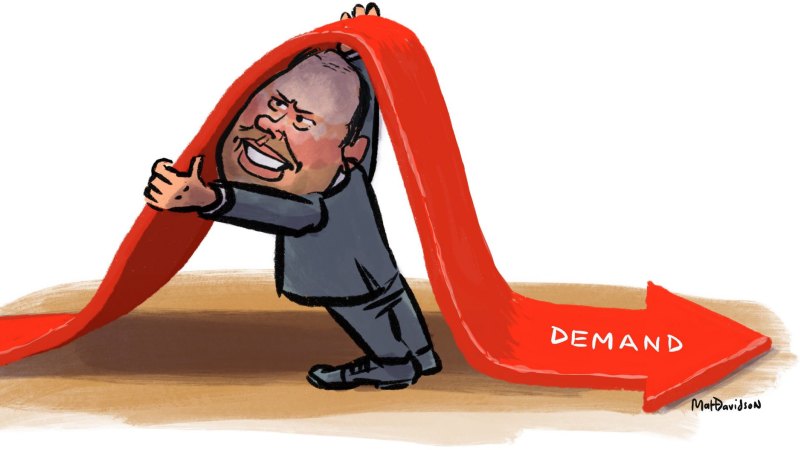 Of course, there was no surplus. There will be no surplus. We’ll never see it. On Thursday Frydenberg will tell us, on the contrary, how big the deficit has grown. By last month it had blown out to $65 billion and it’s only going to get bigger from there.

Am I maintaining my rage? Annabel, I’m sorry to disappoint. But no. That might seem surprising. How could I be critical of a $7 billion deficit yet untroubled by one ten times as big? Easy.

A nation needs to pay down its debt and build its credit when the going is good. As the old adage says, the time to fix the roof is when the sun is shining. So that, when a crisis hits, the government can support the economy and protect the people. When the storm comes, the roof is strong enough to give shelter.

Now another storm is upon us, and it’s even bigger than the last. Unfortunately, despite a decade of political promises from Labor and Liberal governments, Australia entered the pandemic in debt. This is an indictment of the Rudd, Gillard, Abbott, Turnbull and Morrison governments

Still, it could have been worse. We could have been just about any other country on the planet. The Morrison government did the right thing and put in place some major economic buffers to absorb the shock of a massive, global economic shutdown. Other countries took similar measures.

The roof held, however imperfectly. As the country has broadly succeeded in containing the pandemic, the fiscal shelter has allowed the hesitant beginnings of a modest recovery, though Victoria is unlikely to be participating very fully.

This week’s jobs figures showed that about a quarter of the jobs lost earlier this year have now come back. Of the businesses that had asked their banks for a debt repayment holiday, one in five now say they’re ready to resume repayments.

But it was an emergency six-month holding pattern. The existing support measures are due to expire on September 27. The question that Frydenberg has to answer on Thursday is, “What comes next?” If the answer is “nothing”, Australia’s economy will collapse into mass bankruptcies and Depression-era unemployment. So the answer must be “something”.

Until a vaccine is found, or the virus exhausts itself and disappears from the earth, national income will be much reduced. The federal government will need to borrow more and spend more to prevent relapse. And generate some sort of confidence.

But can Australia afford it? Australia has been able easily to afford its emergency spending so far. And here’s the key point – it can afford to do much more.

Compare Australia’s situation. After looking at all countries, the International Monetary Fund in April issued its forecasts for government debt levels for next year. Don’t be baffled by dollar figures. The best measure to look at is net debt, not in dollars but as a proportion of a nation’s total economy. On this measure, US net debt will be 107 per cent of GDP, Japan’s 165 per cent, Italy’s 138, France’s 107, Britain’s 86, and Germany’s 47, according to the IMF.

And Australia’s is forecast to be 40 per cent. Practically identical to Canada’s 40.1 per cent.

“Every other advanced economy except NZ and the Nordics started this pandemic – went into this crisis – with a higher level of public debt than we will end up with,” says the independent economist Saul Eslake.

Eslake says the government should use its ample borrowing firepower to “provide tangible support for a recovery that would be otherwise fragile and vulnerable to any number of plausible shocks”.

Australia’s Reserve Bank agrees that a bigger debt is a serenely untroubling prospect. The governor, Philip Lowe, privately and publicly has been urging the government to extend its fiscal support beyond September for as much and as long as is needed.

But aren’t central banks supposed to be notoriously conservative and debt-averse? Yes.
The Reserve Bank’s position stems from three facts. First, we are in a dire situation. Second, the alternative is far worse – a deep and protracted economic, social and, perhaps, political trauma. Third, the central bank has just about exhausted all of its policy options. The rest is up to governments, state and federal.

Neither do the financial markets have any worries about Australia’s debt level. This week the federal government went into the market to sell $17 billion worth of debt. Buyers clamoured for it. Investors made over $50 billion in bids, so it was almost three times oversubscribed.

The more technocratic explanation came from the Reserve Bank’s deputy governor, Guy Debelle, in a speech last month. He said he didn’t have “any issue at all with the capacity of the government to repay the bonds it has issued”.

His rationale: “Even with the increased issuance to fund the fiscal stimulus, the stock of government debt relative to the size of the Australian economy remains low. Secondly, the government is borrowing at yields that are very low historically.” The yield on the five-year bonds issued this week was under half a per cent “Importantly,” added Debelle, “the yields on government debt are considerably below the long-run growth rate of the economy.”

Meaning? When the economy starts growing again, it should be able to outpace the growth in debt. The debt burden will slowly shrink and fade, in other words.

This is a critical point. The debt has to tide Australia over until it achieves a self-sustaining growth. And growth needs to be strong, not feeble.

So there are three chief tasks for the Morrison government. Frydenberg’s immediate job on Thursday will be to explain how the government will continue to support the economy. The essential elements are obvious. Its JobKeeper wage subsidy program will need to be tweaked but maintained. Its juiced-up JobSeeker payments will need to be maintained. The government likely will want to remove some of the extra juice, but must still continue those payments at a higher rate than their punitive, pre-pandemic rate.

Support for the most COVID-cut industry sectors, such as tourism and the arts, needs to be bolstered. Rent support will need to be extended. The relief from directors’ liabilities will need to be continued to prevent needless bankruptcies.

Beyond that, a shift to strong economic growth will need not just support on the demand side but on the supply side of the economy. That will require investment stimulus. Infrastructure investment, renewable energy and innovation policy all need serious attention. And so will the wider productivity agenda.

The third vital task for Morrison will be not merely to borrow more to achieve all this, but to embrace the concept. Saul Eslake warns that one of the greatest threats to recovery would be a misplaced debt anxiety in the Coalition’s ranks.

“Rhetorically they need to do whatever it takes to allay fears of unsustainable debt,” urges Eslake. “This is Josh Frydenberg’s chance to shape the Liberal Party in his own image and stare down those who might want to go down the Greek path of premature and excessive austerity.”

So, Annabel, this is by way of explaining why I am setting my fiscal rage aside. It’s the season for fiscal rejoicing. I realise that this might make me less amusing, but I have every confidence that you will find other ways to laugh at me. In the nicest possible way.