Breaking News
Home / Latest News / ‘If I kneel down I’ll never get up’: The Queen knights Tom Moore, 100 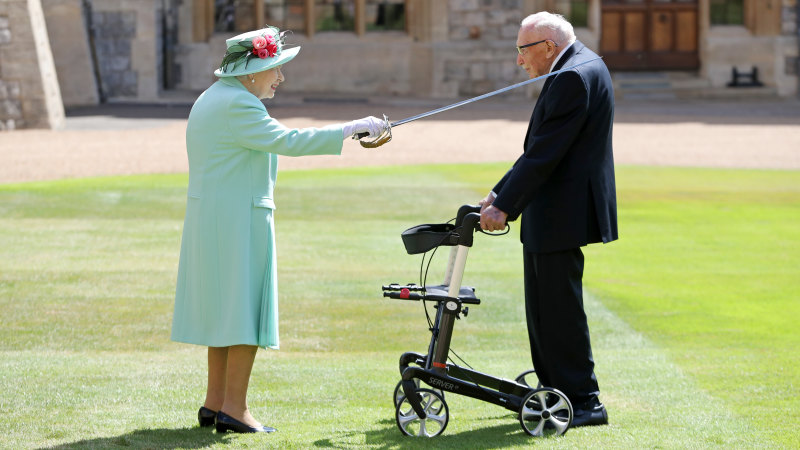 “I have been overwhelmed by the many honours I have received over the past weeks, but there is simply nothing that can compare to this,” he tweeted after the ceremony. “I am overwhelmed with pride and joy.”

Before the ceremony, Moore said on his Twitter account he was “ready and raring to go for what is a very special day”. He told the BBC he would not kneel before the Queen “because if I did I’ll never get up again.”

The ceremony was staged outside of Windsor Castle west of London, where the 94-year old Queen has been sheltering during the COVID-19 pandemic alongside her husband, the Duke of Edinburgh.

Moore, who rose to the rank of captain while serving in India and Burma during the war, revealed that he and the Queen spoke about ages – slightly breaking the protocol of not revealing a private conversation with the Queen.

Moore walked into the nation’s hearts by setting a goal of marking his 100th birthday with a garden lap for each year of his life.

His family elevated the challenge by using social media and the motto #TomorrowWillBeAGoodDay to seek donations to support health care workers during the pandemic, in part a show of gratitude for the doctors and nurses who took care of Moore when he broke his hip last year.

He dreamed of raising £1000 pounds. Instead, he raised so much more.

Previous Ruth Bader Ginsburg says cancer has returned, but she won’t retire
Next Federal Parliament to be cancelled amid growing interstate COVID-19 outbreaks

In central Moscow, where Reuters reporters estimated at least 40,000 people had gathered in one …