‘The fight of our lives’: Doctors call for virus elimination strategy as stage four restrictions loom

admin 2 weeks ago Victoria News Comments Off on ‘The fight of our lives’: Doctors call for virus elimination strategy as stage four restrictions loom 13 Views 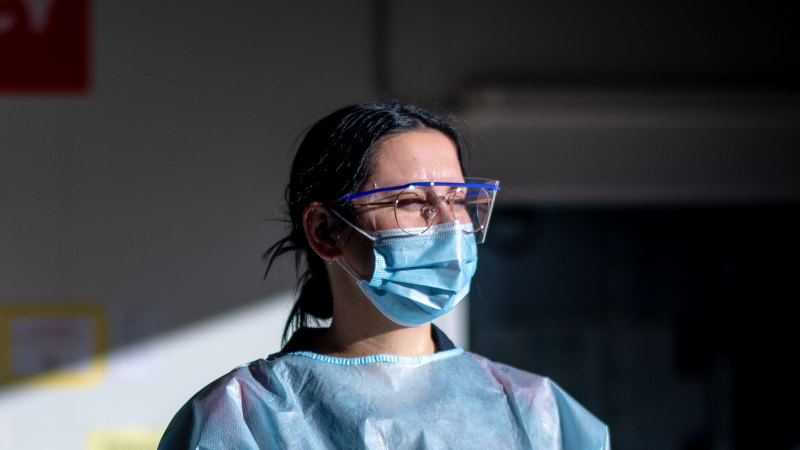 On Friday, 122 Victorians with the virus were in hospital, including 31 in intensive care.

Health Minister Jenny Mikakos said: “This is a serious situation. We are in the fight of our lives.”

Cases have now been reported in 32 nursing homes and at least eight clusters of the illness have emerged in hospitals and other healthcare sites.

Up to 800 healthcare workers have either been diagnosed with the illness or are in isolation as a close contact, according to one union.

Both Premier Daniel Andrews and Chief Health Officer Brett Sutton said stage four restrictions were being considered with “everything on the table”.

Victorians in regional areas on Friday were asked to join the rest of the state in wearing face masks, and non-essential dental work has been postponed in an attempt to halt the spread of the virus.

Mr Andrews flagged a stricter lockdown if the daily case-load figures did not improve.

“If the data shows the strategy is not being as effective as quickly as we would like then we may need to go to new rules,” Mr Andrews said.

The record number of new cases comes just 24 hours after the state recorded its previous high of 317 cases on Thursday and a week after metropolitan Melbourne and Mitchell Shire were placed under stage three lockdown restrictions.

The deaths of a man in his 80s, a man in his 70s and a woman in her 80s brought the state’s death toll to 32 and Professor Sutton warned on Friday that more lives would be lost.

“We have not turned the corner here,” the Chief Health Officer said.

“There will be dozens of individuals who will require hospitalisation from these 428 people.

“Tragically there will be several who require intensive care support and a number of people will die, so it has to turn around.”

On Friday, 122 Victorians with the virus were in hospital, including 31 in intensive care.

“This is a serious situation. We are in the fight of our lives,” Health Minister Jenny Mikakos said.

Restrictions are not set to change in regional Victoria, where 42 new cases have emerged since July 1. But Victorians in the regions have been advised to wear face masks in places such as supermarkets, shops, public transport and taxis where they cannot maintain social distancing.

Emergency and urgent dental care would be available at the Royal Dental Hospital of Melbourne, and community dental services around the state.

In an article for the Medical Journal of Australia, a group of physicians led by epidemiologist Professor Tony Blakely urged the state government to impose a six-week lockdown, with the aim of eliminating community transmission of the virus in Victoria.

The doctors argue the nation faces a two-speed economic and social recovery from the first wave of the pandemic, with Victoria lagging as it remains in partial lockdown trying to contain its second surge outbreaks.

Professor Blakely and his colleagues argue for a “going hard” strategy, saying it would not be too far advanced of the current plan.

“Given the State is in lock-down for six-weeks there is only a marginal cost of ‘going hard’ with a rigorous public health response that increases the probability of achieving elimination,” the group wrote.

The doctors believe that a clear goal of elimination of community spread of the virus and the prospect of a return to near normality would unite the community behind the effort and reduce the calls for an early end to the lockdown.

But there would be a price to pay, with all schools closed as well as all shops – except chemists and supermarkets – massively increased use of masks and only 20 per cent of the workforce to have “essential worker” status.

The state and federal government remain committed to the strategy known as “aggressive suppression” of the spread of the virus with the Commonwealth repeatedly rejecting the elimination strategy as unrealistic.