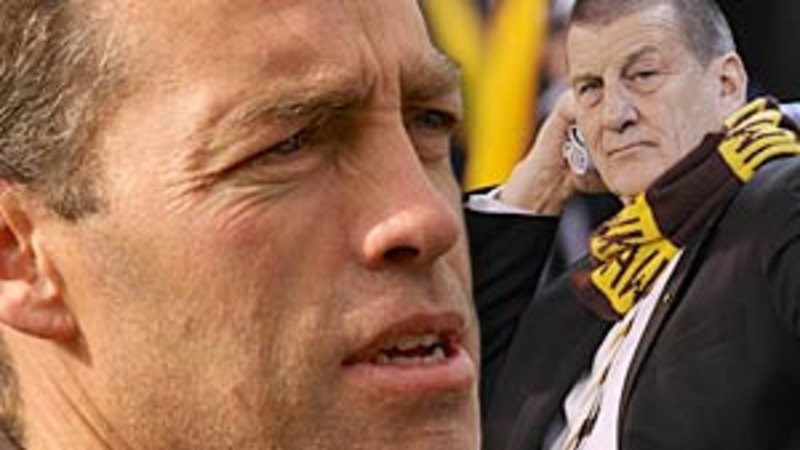 Clarkson is contracted for another two seasons, and Kennett said on Saturday that the Hawks weren’t planning on sacking the coaching great. But the president flagged a used-by date for the coach during his radio interview on 3AW.

Clarkson responded diplomatically after the loss.

“I didn’t even know he said anything. We’ll work our way through that – hopefully it’s a little way off yet,” Clarkson said, while flagging the injection of more youth into the Hawks’ lineup.

“As long as there’s a silver lining and some blue sky for us, we’ll continue to search for it. We know it’s just going to take a roll of the sleeves type of mentality.”

“It’s just been a work in progress for a period of time. We’ve probably changed a little bit of our personnel forward of centre. The two talls I thought gave us great aerial [presence] today. [Sam] Weideman and [Luke] Jackson were both really strong in the air and gave us great ground-level support so probably some things we’ve tinkered with a little bit but also the fact we’ve been working pretty hard on that for a fair while now. We’re starting to get a bit of reward which is great for the players and the club,” Goodwin said.

“We’re enjoying being away. We’ve embraced the hub lifestyle, it’s given a great chance for our players and coaches to be together more often than we were back in Victoria.

“You can see the way they’re connecting off-field is coming out on-field. This is just the start for us.”

The Dees head to Queensland this week and face Brisbane next Sunday night on the Gold Coast.