Travellers in Queensland hotel quarantine not tested for COVID-19 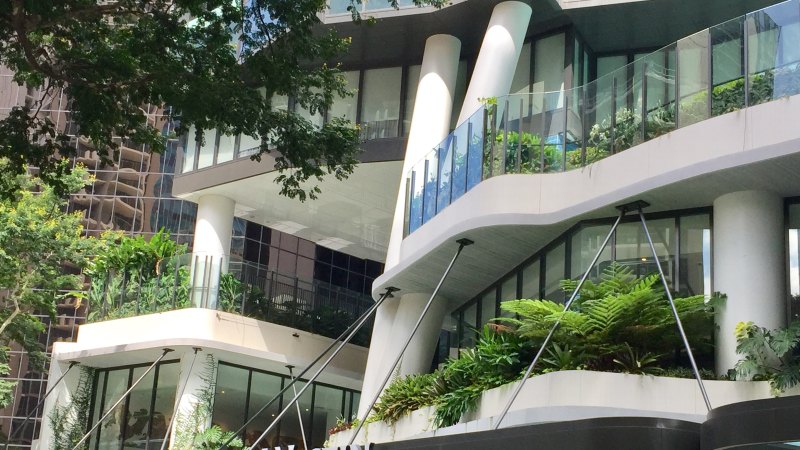 They arrived in Brisbane on June 19 after travelling from London and went straight into hotel quarantine for the mandatory two weeks.

They were allocated a room at the Westin hotel in Brisbane’s CBD and while there, Mr Lam said he became increasingly uncomfortable with the arrangements.

“We weren’t tested once. We did get phone calls asking if we had any symptoms but I think that puts a lot of onus on people who don’t want to be locked up,” he said.

“As we got off the plane they took our temperature at the airport, but after that we weren’t examined by anyone.”

Mr Lam said he was ] concerned about potential transmission within the Westin, where people were allowed out of their rooms for controlled 20-minute “fresh air breaks” but were then allowed to interact on the hotel’s pool deck.

“The officers would escort you to the pool deck, and there could be 10 or more people there at any one time, and at first we didn’t have to wear masks, although towards the end they started making us wear masks,” he said.

Mr Lam thought Queensland’s hotel quarantine was of a high standard overall but could not understand why no testing was carried out even when requested.

Sarah (not her real name) and her husband, who asked to remain anonymous, also stayed at the Westin in Brisbane after arriving on June 16 from the United States.

She requested testing on three separate occasions but was told none would be carried out while in quarantine and given broad directions to speak to a GP once released.

Sarah said she and her husband only had one fresh air break on the Westin pool deck because they were uncomfortable about people from different rooms being together, despite the area being outdoors.

She praised the program overall but couldn’t understand why they were not tested before being released.

“The whole thing was just so well done, but these two things [a lack of testing and allowing guests in a common area] seemed out of place,” she said.

“Such simple things when they’re doing everything else to such maximum effort, it just seems very strange.”

Mr Lam, Sarah and their partners have not tested positive for coronavirus after their release from quarantine.

In response to questions from Brisbane Times, Queensland Health said testing was a part of its hotel quarantine program.

“It is a requirement that all people entering quarantine in government-arranged accommodation must be tested before the end of their 14-day quarantine,” a spokesperson said in a statement.

“The COVID-19 test is included as part of the quarantine, and is carried out by trained local public health unit clinicians within the government-arranged accommodation.”

Further compounding the issue, anyone who refuses a test while in hotel quarantine faces penalties.

“A person who refuses testing in quarantine will be subject to a further 10-day quarantine period at their own expense,” the spokesperson said.

In Victoria, a judicial inquiry starting on Monday will examine claims private contractors allowed major hygiene breaches now linked to fresh outbreaks that have sent Melbourne back into lockdown.

A public submission to the parliamentary inquiry into Queensland’s health response to the pandemic has also raised concerns about the lack of testing being done in hotel quarantine.

Leigh Kelly said in her submission a friend’s daughter returned to Brisbane in June and stayed in hotel quarantine at the Rydges hotel, where she was not tested for COVID-19 despite requesting a test.

“We even asked if she could be tested before being released. But no test was performed,” Ms Kelly wrote.

“Surely it would be commonsense to test ALL people returning to Australia!”

-with Lucy Stone and Marissa Calligeros

“The grass will brown off, which makes them available to burn, as we’ve seen in …