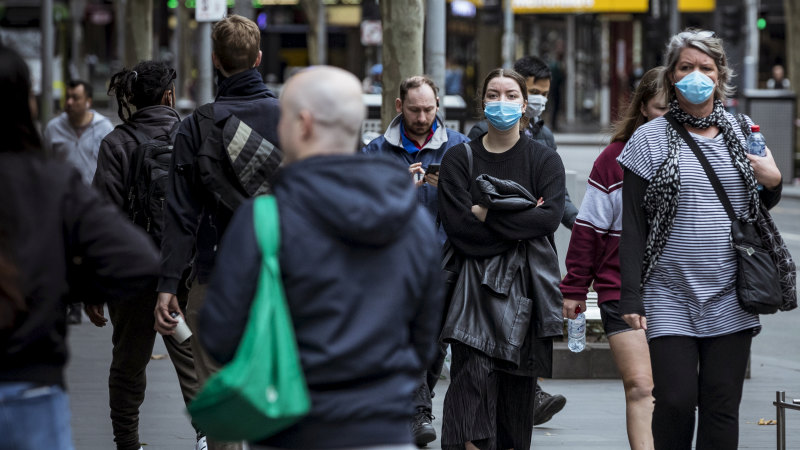 “Putting aside the actual outbreak, Victoria is a place where the virus is less able to spread than NSW, Sydney, South Australia, Western Australia,” said Professor McCaw.

“What it says is an unlucky, random event has led to dramatic consequences in Victoria of an enormous outbreak. It has probably restarted from one or two or a very small number of infections.”

In a second stroke of bad luck, those first infections hit “disadvantaged … high-density, vulnerable populations”, which allowed it to spread faster than it otherwise would, Professor McCaw said.

“A judicial inquiry has been established at arm’s length from government to examine issues relating to hotel quarantine – our focus remains on containing this virus,” a government spokeswoman said.

The report by Professor McCaw’s team, focusing on the period between early June and July 1, uses data from Apple, Facebook and Google and population surveys to estimate how much people are moving around and seeing other people.

It then estimates the state’s effective reproduction number (R) – the average number of people each infected person would pass the virus to if the virus was circulating. The report is handed each week to state and federal chief health officers.

On July 1, as Victoria’s outbreak was gathering pace, the state’s estimated effective reproduction number was just 0.92 – the best in the nation.

The average Victorian was seeing only 5.9 people outside the house per day. In NSW, that number was 8.1; in the Northern Territory it had climbed to 11.5.

“The potential for spread is greater in NSW than Victoria. If this scenario had happened in NSW rather than Victoria, we might be in a worse position than where we are now.”

Professor McCaw said internal government data shows the state’s effective reproduction number has been steadily trending downwards since the start of the second surge and now hovers about 1.3.

Efforts to bring it below one – when the epidemic would start to shrink – had not yet been successful, explaining why Premier Daniel Andrews on Sunday made mask wearing compulsory.

“The epidemic is still growing. But it is growing more slowly, and that’s a good thing,” said Professor McCaw.

“Right now, we really are on that knife-edge. If R stays at 1.3, there will be a significant escalation of numbers per day in the coming weeks.”

Victoria’s Chief Health Officer Professor Brett Sutton said on Sunday the state’s R-rate had gone from about 2.5 a month ago to “close to one”.

Health authorities are working to keep the number below one, but Professor Sutton said he was not relaxing.

“We haven’t calculated in the last couple of days, but it was pretty much sitting on ones,” he said.

“I won’t sit back and relax even if the rate is calculated below one. We need to watch the numbers to see what is actually happening.”

Previous ‘We haven’t given him much thought’: Tigers take swipe at Matterson
Next Kennett puts a use-by date on Clarkson’s time at Hawthorn