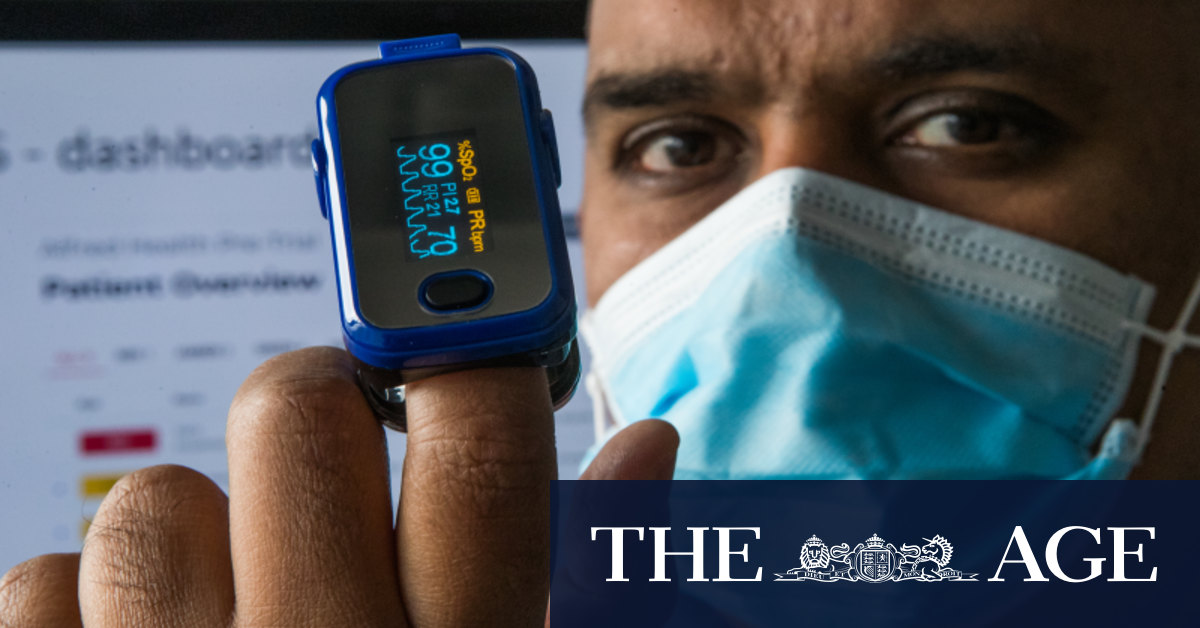 The Alfred project’s developers say they have been waiting since mid-May for government approval to begin a trial.

Joseph Mathew, one of the doctors from The Alfred who has helped develop the automated monitoring system, said keeping most coronavirus patients away from hospitals was the safest thing to do.

“By keeping people at home, and keeping them monitored, we can watch for clinical deterioration, but also minimise unnecessary hospital visits that put them, their healthcare workers and others at risk,” he said.

One of the dangerous hallmarks of COVID-19 is that people can feel quite healthy while their oxygen levels plunge, a condition sometimes dubbed “silent hypoxia”.

“When it drops down, they don’t feel short of breath,” said Associate Professor Mathew. “But when they randomly go into hospital to check it, they have an oxygen saturation of 90 or 92 per cent, which is pretty bad. If not treated quickly, patients can get worse quickly and might die.”

People also typically don’t experience the worst of their symptoms until more than a week after the onset of the virus.

The humble thermometer’s role monitoring house-bound patients with mild symptoms is backed up by the oximeter, or oxygen saturation probe, a small device that clips onto patients’ fingers or earlobes and measures oxygen levels in the blood.

Earlier this year, the Royal Melbourne Hospital bought 1000 oximeters and since April it has used them to remotely monitor almost 100 patients with coronavirus.

Supervising doctors receive a MET Call if the software identifies that a patient could be deteriorating.

At one stage about a third of the patients being monitored needed to go to hospital, as older people with complex medical problems were most likely to be placed in the program.

“We’ve got about 20 patients actively,” said consultant emergency physician Dr Martin Dutch, who developed the program. “It is growing every day.”

“For patients who have coronavirus, it can feel very isolating, and I think patients find it immensely reassuring that someone is keeping an eye on them, as they battle their illness in the community.”

The developers of Alfred Health’s pandemic intervention and monitoring system say their system takes monitoring further, as vital signs are analysed by the system’s algorithms alongside information about people’s existing conditions.

Patients are divided into red, amber or green cases. Red cases are immediately sent an ambulance, while people in the amber group are called by a nurse and could be prompted to do some additional monitoring.

Green cases would receive a text for two to three weeks asking them to enter their vital signs, until they were out of the danger period.

The Victorian government has not said why The Alfred’s program is still awaiting approval. A spokeswoman said coronavirus cases were monitored remotely via the public health team, “with a mix of phone calls and text messages asking people to report in any symptoms and confirm they remain in quarantine”.

It is understood home hospital programs are also being developed at Northern Health and Western Health, while the Austin Hospital has monitored hundreds of positive cases using its COVID Care program, which prompts patients via a text message to take their temperature and answer a daily questionnaire about their symptoms.

Michael, who lives in Melbourne’s north-east with his parents, was recently placed on the program after receiving a call from an infectious diseases doctor about two weeks ago.

They told him: “It might be a bit of shock to you, but you have a coronavirus.”

The student in his 20s, who caught the virus from a close contact, said he felt no signs of COVID-19, other than the loss of taste and smell, which left him unable to smell the lavender bush in his garden.

He said it was reassuring to know that his symptoms were being monitored, and if he had become worse, he could easily have sought medical advice.

“There was always a good fallback, which was nice, and it did ease your mind,” he said.