admin July 23, 2020 Victoria News Comments Off on One in five fines handed to those caught leaving locked-down zones 60 Views 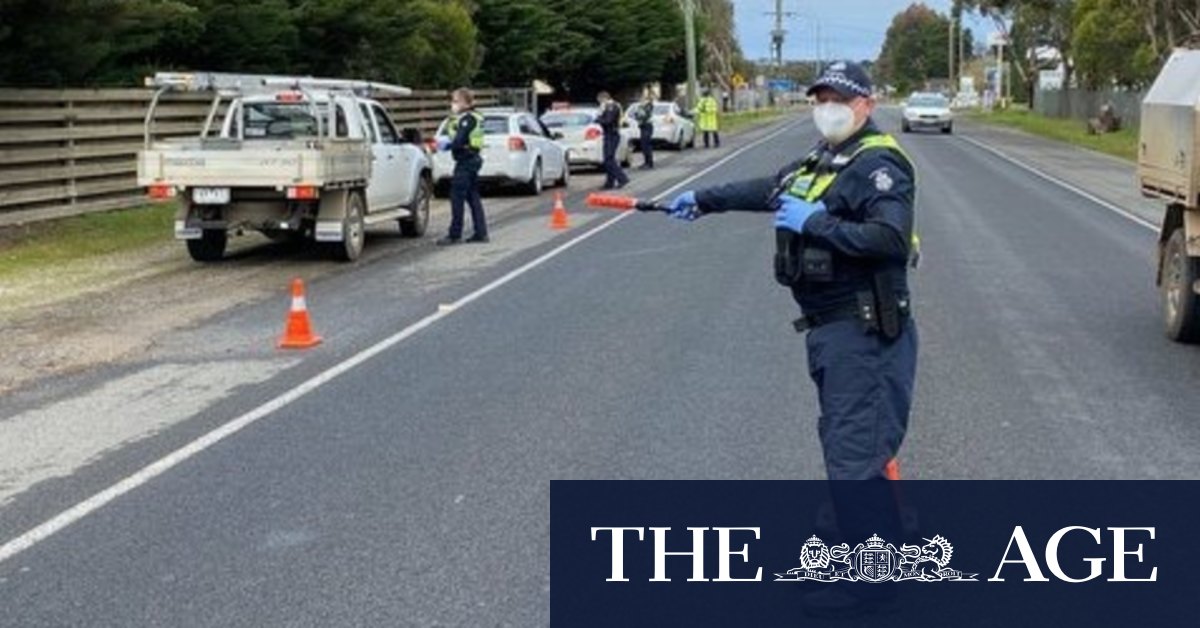 Police said those busted trying to leave their local areas and travel to regional Victoria included a woman wanting to catch waves on the Surf Coast and a man attempting to travel across town to fish.

More than 230,000 vehicles have also been intercepted along main roads surrounding the lockdown areas as part of the police operation.

Torquay police Sergeant Stephen Bull said while most people they had checked had been doing the right thing, a 49-year-old Albert Park woman was fined $1652 and escorted from the area on Wednesday afternoon after she was caught shopping and dining in the town.

“She’d taken public transport down here. She was sick of walking around her lockdown suburb, like what we saw with the woman from Brighton the other day,” he said.

A woman dubbed “Karen from Brighton” shot to social media fame last week after she told Nine News that she had gone to the Tan in Melbourne’s CBD to exercise because she was “sick of walking the same streets”.

“You know, I’ve done all of Brighton,” she said.

This week, police on the Surf Coast have begun installing roadblocks along thoroughfares to the Great Ocean Road, with extra checkpoints at Torquay, Lorne, Anglesea and Winchelsea in an attempt to catch those breaking the rules.

“We understand that people might want to go surfing and it’s a good spot down here but there are other forms of exercise you can engage in that are more suitable to the current lockdown,” Sergeant Bull said.

“For us, being out and about gives a bit of reassurance to our community that we’re taking this seriously and trying to prevent people from escaping out of Melbourne when they don’t have a legitimate reason to do so.”

There were 403 new cases of COVID-19 announced on Thursday. Of those, 390 were in metro Melbourne and 13 in regional Victoria.

Five people also died overnight, including two men – one in his 50s and the other in his 70s – with no links to aged care.

There are currently four active COVID-19 cases on the Surf Coast and 26 in the neighbouring Greater Geelong area. A further 26 are in the nearby Colac Otway region.

Premier Daniel Andrews said case numbers were currently low in regional Victoria and “we have to jealously guard that”.

“There are very few people who, to the satisfaction of a member of Victoria Police, could explain why it was they were going into regional Victoria to buy goods they can very easily be procured in metro Melbourne,” he said.

At least a dozen businesses in East Gippsland had to temporarily close earlier this week after a woman travelled to the region from Melbourne and visited several shops while awaiting results of a COVID-19 test that later returned a positive result.

From Thursday, police will also enforce $200 fines for those not wearing a face mask when practical.

Deputy Commissioner Rick Nugent told radio station 3AW on Thursday police would focus on education over enforcement for mask wearing during the coming days as those in stage three lockdown transition to a “new norm”.

“We understand this isn’t something that has existed before so we’ve said a week or so as to provide the community an opportunity to get on board, purchase a mask and to wear them,” Mr Nugent said.

He said people who were meant to be inside stage three restrictions zones were also still being caught travelling a long way from home.

This included Victorians caught trying to evade checkpoints to surf or head to the bush in cars packed with camping gear.

Mr Nugent said major checkpoints, complete with ADF soldiers, were working well to catch those attempting to flout the rules.

“Those types of fines, we’re still giving out,” he said.

Previous ‘See you later’: Accused killer swears at court, storms out of bail bid
Next Tax cuts on agenda in bid for recovery after horror deficit, debt