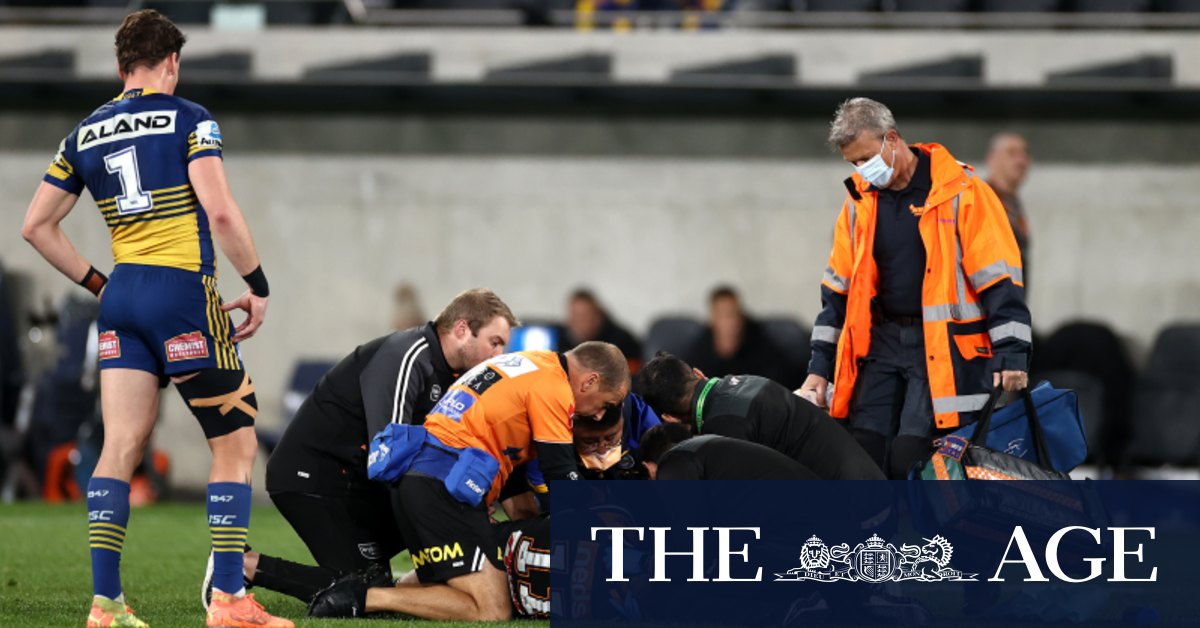 Silence fell across the ground when Chee Kam’s night ended approaching the half hour, especially the scenes that immediately followed.

Chee Kam went low on Eels back-rower Shaun Lane and was clearly in trouble as he failed to move on the turf. His arms and legs then started to convulse.

A Tigers trainer charged nearly 50 metres to tell referee Gerard Sutton to stop the game as replays or any TV footage of Chee Kam was kept off the big screen inside the ground.

Several Eels trainers made a point of helping Chee Kam on to the back of a medicab in a wonderful show of support.

Tigers officials reported at half-time Chee Kam had no issues with his back or neck and had regained consciousness. He was rushed to hospital in an ambulance.

“He’s OK, he spoke to everyone before he left for hospital to get checked up,” Tigers coach Michael Maguire said.

“It’s not nice to have one of your players in that position. ‘Chee’ is a great character and all the boys are really fond of him.

“It’s nice to hear he’s OK. The way they fought [tonight], they represented the Wests Tigers jersey, and it’s exactly what we’ve been talking about … at one stage I had nobody on the bench, a few were getting patched up … so to fight to the end and still keep fighting the way they showed, it’s what the jersey is all about.”

The night also ended awfully for former Tiger Ryan Matterson, who bounced off Russell Packer as he charged the ball up and stumbled around in the back play. Eels winger Blake Ferguson even made a point of doing his best to cuddle Matterson, who looked ready to fall over at any second.

Matterson has had a history with concussions while Chee Kam only experienced his first serious one last year when knocked out by Newcastle ace Kalyn Ponga. Ponga reached out to Chee Kam straight after the game while Chee Kam was forced to ask his partner who had won the match when he came to in the back of an ambulance en route to John Hunter Hospital.

Eels coach Brad Arthur said: “‘Matto’ is alright. We’ll give him a good 10-day break and he’ll be right for next week [against the Bulldogs].

“We knew they’d try and throw everything at us in the first 20 minutes. We found a way to win, but we still have a bit to work on. It wasn’t great.”

Giant Tiger Luciano Leilua was over for a try after just two minutes before Bankwest specialist Sivo hit back for the hosts.

Doueihi’s shoulder charge on Sivo had TV commentators asking what else the Tigers’ No.1 was meant to do, especially given Roosters ace James Tedesco was forced to miss a game through concuission for trying to stop Sivo in the same corner of the ground a few weeks earlier.

”Adam Doueihi is protecting himself … it’s a bit of self-preservation,” Gus Gould said on Nine.

Campbell-Gillard has been outstanding and deserved his four-pointer, looking like a playmaker as he swerved and evaded tackles.

“Reg was looking to play the full 80 again after playing 80 last week, he played 68 straight minutes tonight, it was a big effort for a front-rower off the back of a five-day turnaround,” Arthur said.

“He’s bombed two the last couple of weeks and he said he was going to get one this week.”

The Eels enjoyed plenty of possession in the second half as the Tigers struggled to retain troops. Doueihi failed a HIA while Sam McIntyre also spent time off the field being assessed before he returned.

The Tigers refused to cave defensively – but also struggled to chase a repeat set.

Parramatta will have 10 days to prepare for next Sunday’s clash against the Dogs while the Tigers host the Warriors at the SCG.

Previous AFL players doing it hard with fixture pile-up? You must be joking
Next Alligator Blood disqualified, trainer fined $20,000